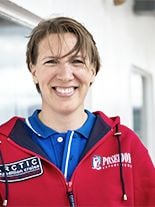 Felicity Aston is the first and only woman in the world to ski across Antarctica alone. The 1744km, 59-day journey completed in January 2012 also made her the first person in the world to traverse the continent purely by muscle power without the aid of kites or machines, earning her a place in the Guinness Book of World Records. In 2015 she was awarded the Queen’s Polar Medal for services in Antarctica and was appointed MBE for services to Polar Exploration. Felicity has also been elected Fellow of the Royal Geographical Society (with IBG) in London and is a Fellow of The Explorers Club in New York.

Felicity has created and led record-setting expeditions to both the North and South Pole with international teams of women, many of whom were complete novices. In 2018 her Women’s Euro-Arabian North Pole Expedition brought together women from Saudi Arabia, Qatar, Kuwait, Oman, Sweden, Slovenia, Russia, France and the UK, who together reached the top of the world by ski. In 2009 her 38-day 911km Kaspersky Lab Commonwealth Antarctic Expedition was completed by a team of women from countries including Brunei Darussalam, Cyprus, Ghana, India, Jamaica, Singapore, New Zealand and the UK. Felicity is currently preparing for the B.I.G. (Before It’s Gone) North Pole Expedition with a team of women from across the UK due to ski the last degree of latitude to the North Pole in April 2022 to gather vital data for sea ice research.

Felicity has written five books including, ‘Call of the White: Taking the World to the South Pole’ which was a finalist in the Banff Mountain Book Competition, and ‘Alone in Antarctica’ (with a foreword by Joanne Lumley) which was acclaimed ‘Best Fall Read’ by National Geographic. Her most recent title ‘Life Lessons from Explorers’ is out now, while her next book, written with members of the Women’s Euro-Arabian North Pole Expedition of 2018, is due for release in 2022.

Trained as a Physicist and Meteorologist, Felicity’s first polar experience was as a scientist with the British Antarctic Survey. Based for three years on a remote research station on the Antarctic Peninsula, her job was to monitor climate and ozone. She is currently investigating the atmospheric deposition of microplastics on high latitude Arctic Ocean sea ice at the National Oceanography Centre / University of Southampton in the UK.