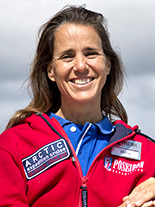 Born in Barcelona, Marta started sailing at the age of 8 for pleasure. This however soon led her to competition sailing, she was training in the Spanish Pre-Olympic sailing team for Athens 2004. Although a Degree in Tourism Management and in Humanities, she turned her passion into a job at sea, embarking on all kinds of boats and projects: as crew or skipper on sailboats, shore-crew for Round the World Sailing Races, sailing instructor or kayak guide.

Being so close to the sea since childhood has awakened in her a great respect and attraction for the natural environment. Marta`s relationship and admiration for the Polar Regions began in 2011 in Greenland, working for three seasons as Tour Coordinator and Zodiac driver, and continued in the Antarctic by joining the Basque Country sailing expedition Pakea Bizkaia in 2013.

When not working at sea, she enjoys traveling and hiking in new mountains, practicing yoga as a student or as a teacher or just relaxing close to the Mediterranean.