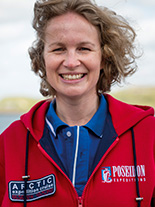 Anja was born and raised just outside Potsdam, Germany. With 16, she received a scholarship to spend a year in Canada. Later she studied «Tourism Management» in Germany. Greenland is Anja`s first polar love! In the year 2000 and as part of an internship, she worked and lived in Ilulissat/ West Greenland and in a close by a little village called Oqaatsut with a total population of 40 people and 200 dogs. Since then, Anja has returned to the North every year and worked on Expedition vessels first as a tour guide, but very quickly as an Expedition Leader. To Anja, all arctic areas are special: Iceland, Svalbard, the Faroes and the Shetland Islands... but do not forget Antarctica, a fascination in itself! Anja has been to Antarctica many seasons and she calls herself lucky to have spent her «holiday» at the former British station Port Lockroy some years ago. Sitting and watching the albatross on the Falkland Islands and the King penguins in South Georgia are unforgettable experiences. For one year, Anja also worked along the Norwegian coast.

Anja loves challenges and to explore new areas. She has lived in London, Athens and San Francisco for years before moving back to her German home. Privately, Anja admits that the older she gets, the fonder she becomes of gardening and cooking. Besides her native German, Anja speaks English as well as Danish/Norwegian and understands Spanish and Russian.