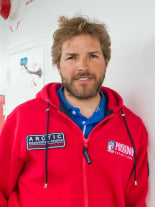 Christian Bruttel was born and raised in Villingen, a little town in the black forest in the south of Germany. All his life he has been taken by the outdoors and traveling the world, doing activities such as climbing, hiking, kayaking, backpacking and long distance bike riding. Christian rode his bike across the US and backpacked through South Africa, Nepal and Australia. During his master studies to become a teacher he organized a guided trip up Mt. Kenya and that awoke within him a desire for becoming a guide. After his studies in Germany, Christian went after his long-cherished dream to live and study in the Arctic. He signed up for a yearlong guide study in Svalbard in 2012 and since then have been living in Longyearbyen and guiding in one of the most fascinating places in the world amongst glaciers and polar bears.