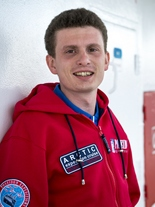 Boris was born in the Ural and grew up in Caucasia. After spending his childhood in the mountains, he attended the faculty of Geography at Moscow State University to study oceanic ecosystems. He obtained a Master’s Degree in Geography and specialized in biodiversity and biomonitoring. Since the age of 20, he has participated in marine surveys with the team of the Institute of Ecology and Evolution of the Russian Academy of Sciences. During the last seven years, he’s been working throughout all the Russian Arctic and Far East Seas as well as in the Caspian and the Mediterranean Seas. Boris conducted aerial and boat surveys there, put satellite tags on seals and belugas, counted whales, polar bears and walruses.

Last year Boris finished his PhD thesis, where he analysed the distribution patterns of the beluga whales in the Russian Far East seas. In addition to the fundamental scientific objectives, his work pursues such pragmatic purposes as a marine resources stock assessment, development of recommendations to reduce the negative impact risk of shipping on the marine mammal populations. Now he works for WWF Russia as a coordinator of the Russian Arctic Marine Protected Areas planning project.

The Results of his expeditions are not only edited in scientific journals. He also regularly gives lectures to children and adults. His photographs taken from many different areas of the Arctic are present at exhibition centers in the biggest cities of Russia.