Temperature in the Arctic Circle

The Arctic, generally defined as the area above ~66° 34'N (the Arctic Circle of latitude) by the solar radiation characteristics, is a vast area with short, cool summers and long, cold winters. Countries like Canada, the US (specifically Alaska), Iceland, Greenland, Norway, Sweden, Finland, and Russia have Arctic land territories and adjacent seas that are also partially included in the Arctic Ocean.

How cold is the Arctic Circle?

The Arctic circle temp has significant seasonal and locational variability, meaning the average numbers that describe the Arctic as a whole are not always accurate for the chosen city, area, or month. They depend on the region’s proximity of the sea, elevation, and ice and snow cover. Northern Alaska, Canada, and Siberia tend to be the coldest polar regions with the lowest temperatures between −54 and −46° C (−65 and −50° F). And they would feel even colder to us due to windchill.

What is the average temperature in the Arctic?


In general, the monthly average temperature in the Arctic Circle is below 10° C (50 ° F) throughout the year, even in the summer. To compare the differences between summer and winter, let’s look at two regions mostly visited by Arctic travelers: Ilulissat, Greenland, and Longyearbyen, Svalbard. We’ll notice that the differences between summer and winter are quite pronounced. 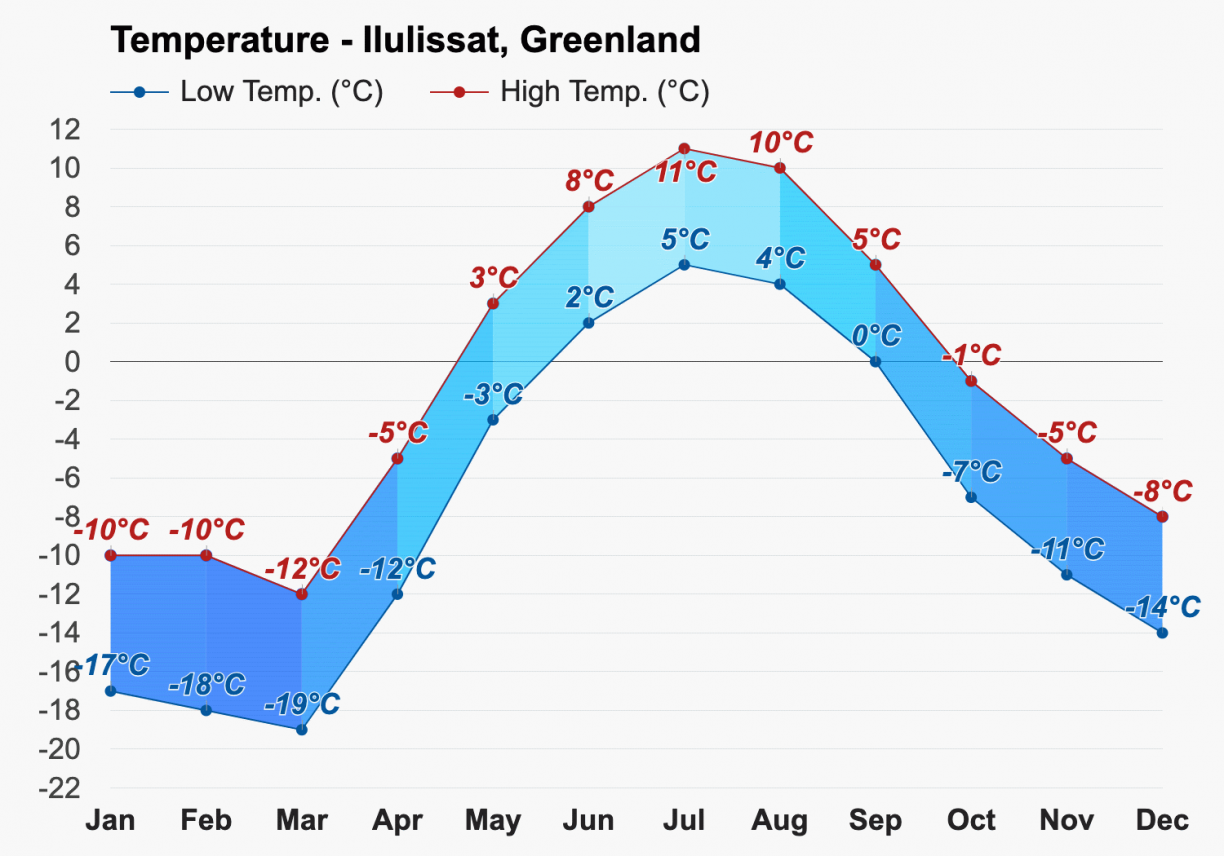 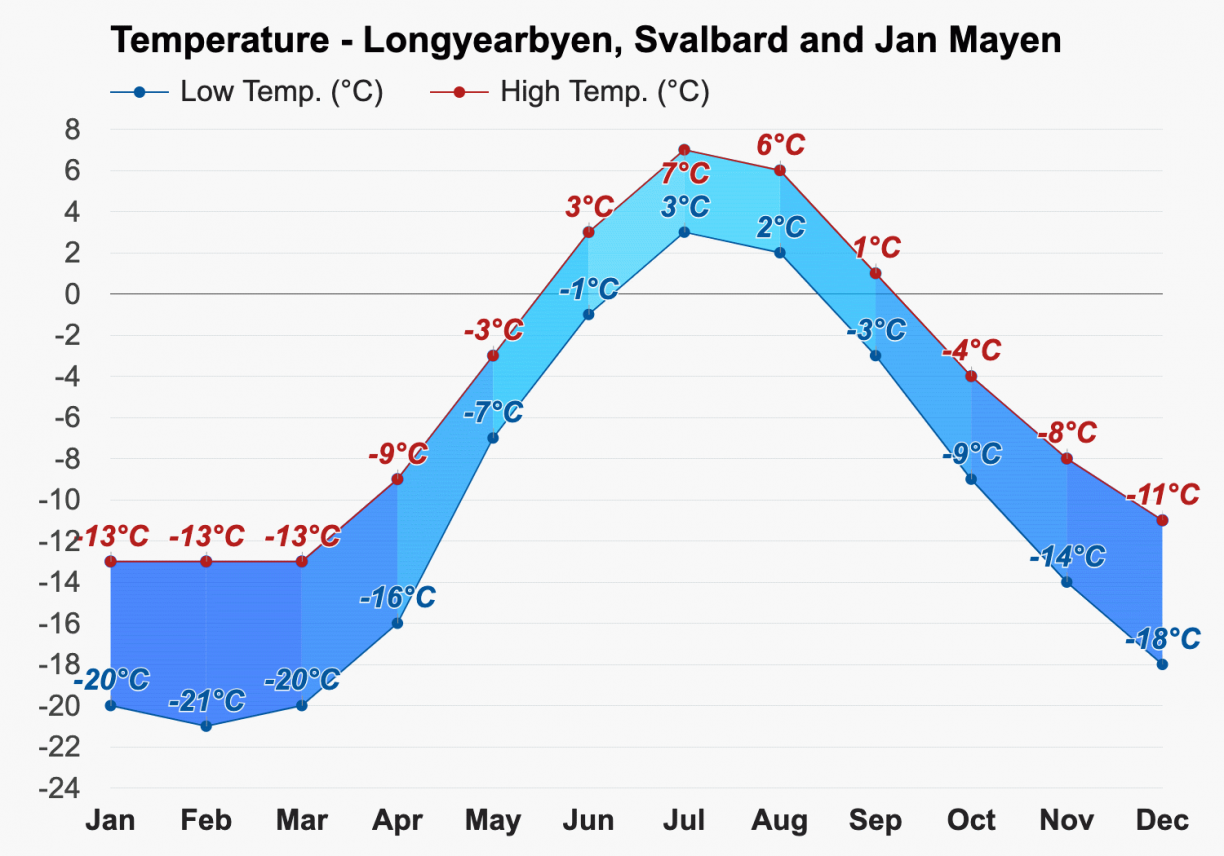 What is the North Pole's highest temperature?

The answer to a Google query the likes of ‘North Pole highest temperature’ is not actually that simple. There is no weather station mounted directly at 90° N since there is only drifting sea ice. The average temperature value for the North Pole can either be interpolated using two closest land stations, estimated with the use of drifting buys and webcams, or derived from satellite observations. The data suggests it can get as warm as 22° C (72° F).

Record temperature observations taken down by research stations in different areas of the Arctic range from −62.1 to −69.6° C (−79.6 to −92.2° F). The lowest temperature of the region was recorded in 1991 at Klinck station in Greenland, even though the island’s weather during summer is quite mild and it can get as warm as 20° C (68° F). Russian Arctic territories that are partially located on permafrost share similar winter temperature findings of only a few degrees higher than the record.

Weather in the Arctic Circle

At destinations like Svalbard, Greenland, and Franz Josef Land, the summer weather in the Arctic Circle is quite moderate: the temperatures are about 0° C (32° F), at times, the sun does not set, there is less precipitation, while it does occasionally snow and rain, some of the seas and water basins are completely ice-free, and others are partially covered in thin ice that enables cruise navigation. Late spring and early autumn are still suitable for tourism, with lots of ice at the beginning of the season, meaning more chances to spot ice-dependent wildlife, and northern light displays in September. Winter weather can be quite rough, especially for areas on land, since daylight is limited and there is no surrounding water to accumulate warmth.

In recent years, the weather in the Arctic Circle seems to be experiencing changes of unprecedented magnitude: the climatology is said to be shifting towards global warming. It is triggered by increasing greenhouse emissions, primarily from burning fossil fuels, that trap heat in the atmosphere. New record temperatures are reported alarmingly often. In 2020, the Arctic highest temperature of 38 °C (100.4 °F) was measured at a town called Verkhoyansk, Republic of Sakha, Russia. The WMO’s rapporteur, professor Cerveny, stressed the need for continuous observations that will allow scientists to monitor the situation.

If you want to know the average temperature in the Arctic Circle, think of a specific location and season first because the findings will be much more representative. For a purely scientific interest, you can study resources like NOAA (National Oceanic and Atmospheric Administration), specifically their Arctic program. And for travelers looking to discover the beauty and nature of the northern latitudes with summer cruises, just know that the weather is more than adequate for a visit, given the right clothing and gear.

What is the Arctic biome temperature?

The Arctic tundra is the coldest of all biomes, with an average annual temperature in the Arctic Circle being -12 to -6° C (0 to 20° F). Still, this vast, cold, and mountainous area is home to a wealth of plant life and a habitat for small and large land mammals alike. The species that live here have adapted to the extreme conditions and rely on the snow and ice to hunt and breed.

Is the Arctic or Antarctica colder?

The Arctic has an average winter temperature of -34° C (-30° F), and the Antarctic winter is about two times colder: −60° C (−76° F). That is mainly caused by the landscape differences between the two regions. The Arctic is mainly an ocean with an ice cover, and the water underneath keeps the heat from escaping too fast. Antarctica is mostly a continent that is very dry and has high elevation and a strong wind current to keep the warm air at bay.