Arctic Food Web: Everything You Need To Know

The polar regions, the Arctic especially, are very intricate and vulnerable as an ecosystem. Any external influence has the potential of harming the delicate balance established between animals, organisms, and plants. To preserve the Arctic and be able to visit it in a few years' time, we need to be conscious about what is happening around us and learn about the vital connections between nature and wildlife. Understanding the Arctic food web is a basic step towards raising environmental awareness.

What is a Food Web?

To understand what a food web is, we need to consider the concept of a food chain. Imagine a huge bowhead whale swimming in the Chukchi sea and consuming zooplankton in millions every day. Their connection can be represented in a chain — a linear diagram showing the energy transfer between different organisms in an ecosystem.

Now, if you add more species that either prey on or are preyed on by whales and zooplankton, like fish and phytoplankton, and then add all of their food sources and consumers as well, you will get a food web. A food web is a convoluted network of various interconnected food chains that describes the feeding patterns between different animals.

How the changing climate affects the Arctic

The Arctic Ocean is frozen over with sea ice, with large ecosystems existing both above and below it. The primary production of energy relies on photosynthesis, so it requires direct sunlight. In the winter above the Arctic Circle, though, the sun does not come above the horizon for more than 24 hours to a phenomenon called polar night. And even as the days start growing longer, the thick sea ice cover prevents sunlight from reaching phytoplankton. Other animals, however, are very dependent on this ice: like polar bears, walruses, and seals, being their resting, breeding, and hunting ground.

As we can see, ice becomes a deciding factor holding the balance of the food web together. Continuous research suggests that climate change is presenting a real threat to sea ice, with the average temperatures in the Arctic getting higher due to increased carbon dioxide emissions. The ice coverage becomes thinner, and the equilibrium of the web can be tipped by the vulnerability of predators and the abundance of producers. Preserving the natural habitat of ice-dependent animals becomes a primary concern for opinion leaders worldwide.

What are the producers in the Arctic food chains?

The producers in the Arctic Ocean are mostly phytoplankton — tiny, microscopic organisms that make their own food by converting the energy from the sun through photosynthesis. They are essentially different plants: seaweeds, seagrasses, and microscopic algae. Being the base of the food chain, they represent the most important food source of the ecosystem.

What are the consumers in the Arctic food chains?

The primary consumers in the Arctic are zooplankton that include pelagic crustaceans like copepods. Secondary consumers include organisms from multiple trophic levels, meaning, they eat both the zooplankton and each other. They are small prawns or krill or species of fish and birds like cod or eider duck, and larger animals like ringed seals or Arctic foxes. Finally, at the highest level of the web are tertiary consumers that have no natural predators of their own, like polar bears or orcas (killer whales).

Why is the bottom of the Arctic food web important?

Producers that lie at the bottom of the web are essential for its survival. Other species above them are unable to transform the endless supply of solar energy, they can’t make their own food and have to rely on other organisms to deliver it to them. The foundation of all chains keeps the whole web stable and enables further consumption. Related research confirms that any changes in the lifecycles or population of the tiny plants of the Arctic Ocean have the potential to impact larger animals like polar bears and whales.

Why are Phytoplankton so important?

Through photosynthesis, phytoplankton takes in carbon dioxide from the atmosphere and produces oxygen. These tiny organisms make up less than 1% of the world’s plant biomass, and yet, if we combine their input from all the world’s oceans, they produce half of the Earth’s oxygen. Needless to say, this is not only important for the Arctic food cycle to have a substantial base, but also crucial for us as a species and has the potential to affect the processes of consuming and producing energy on a global scale.

The sea ice part of the food web is represented by animals that either spend all of their lives underwater or depend on both water and ice.

Plankton drifts with the ocean currents since it is too weak to swim against it. As mentioned above, phytoplankton plays an essential role in the web, being its basic foundation. Primary consumers like small fish, zooplankton, and crustaceans rely on it as a food source.

Krill are small shrimp-like crustaceans that are crucial as a food chain link for hundreds of different animals ranging in size, from birds and fishes to whales. Their primary food source is ice-algae. Global warming might cause krill populations to decline in numbers. 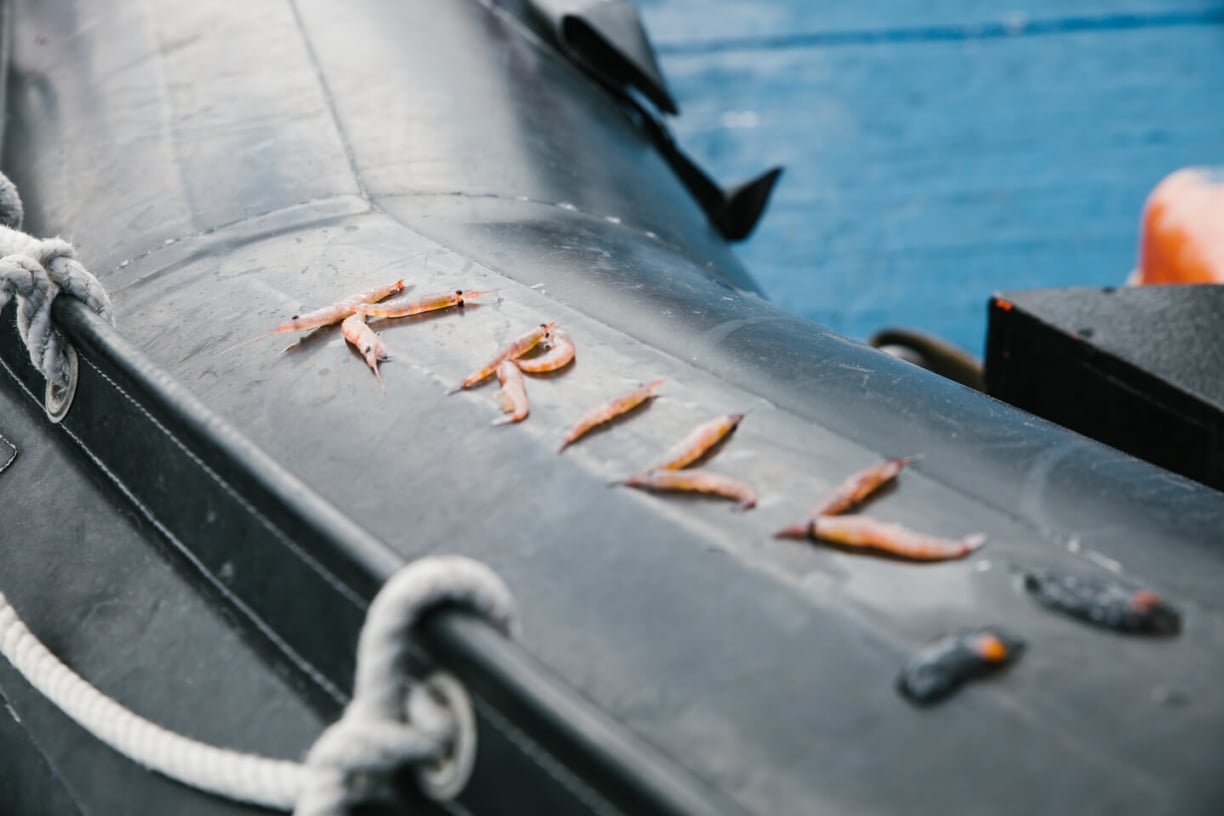 Scientists say that there are about 240 different species of fish living in the Arctic Ocean. An integral food chain link among them is the Arctic cod, which links the underwater web with the one on land since it is eaten by ringed seals and ivory gulls. Fish is also eaten by small land mammals and birds. 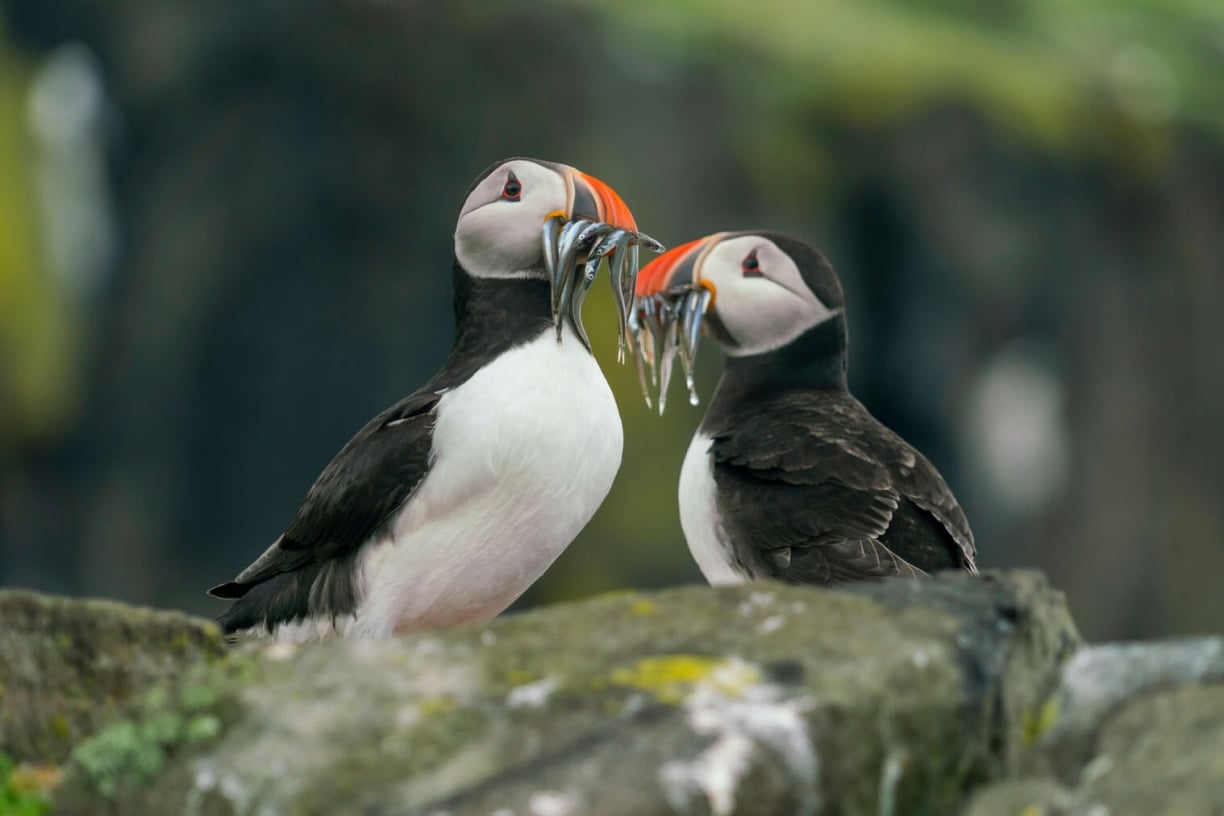 Some of the Arctic seal species include the bearded seal, the harp seal, the hooded seal, and the ringed seal. The last one is most abundant in the Arctic and represents a polar bear’s favorite prey. Seals are very ice-dependent and use their sharp claws to maintain breathing holes in the ice. 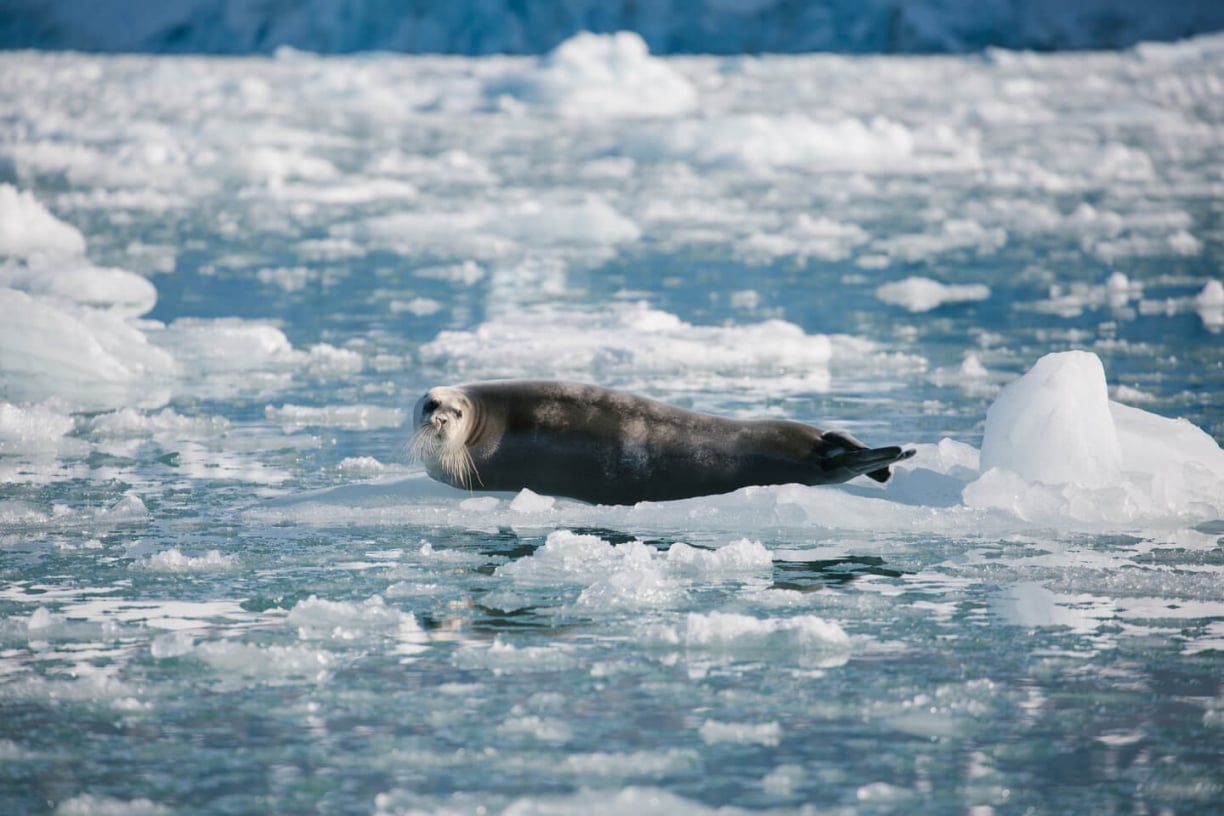 Killer whales or orcas, the largest dolphin species, have teeth, but their diet is a bit different from other whale species. They are apex predators and represent a dead-end of the food chain. Orcas eat fish, squid, and even target seals or other whales. Other Arctic whale species, like the bowhead whale, beluga, and narwhal, mostly eat krill and fish. 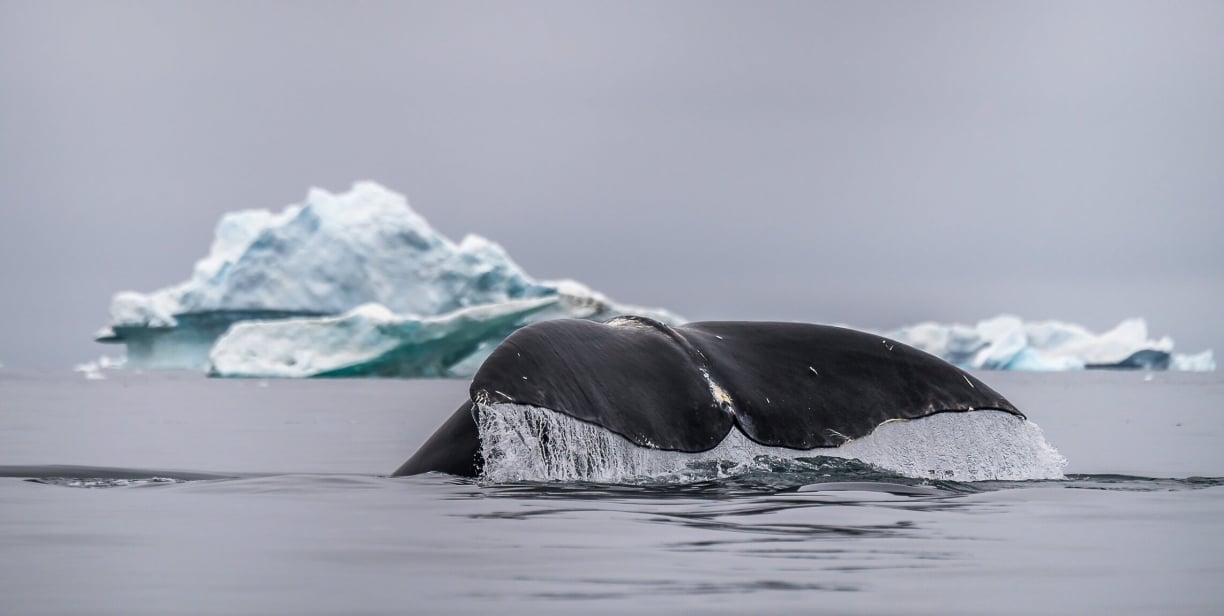 On land, the Arctic wildlife is represented by a variety of birds, small mammals like Arctic hare or weasel, larger mammals like reindeer and Arctic fox, and the kings of the polar realm — polar bears.

Arctic birdlife is very diverse, especially in the summer, when many species come to the areas of Svalbard, Greenland, and Franz Josef Land to breed. Some common representatives are black guillemots, ivory gulls, skuas, and kittiwake. They have different feeding habits, targeting fish, insects, worms, and even small mammals. 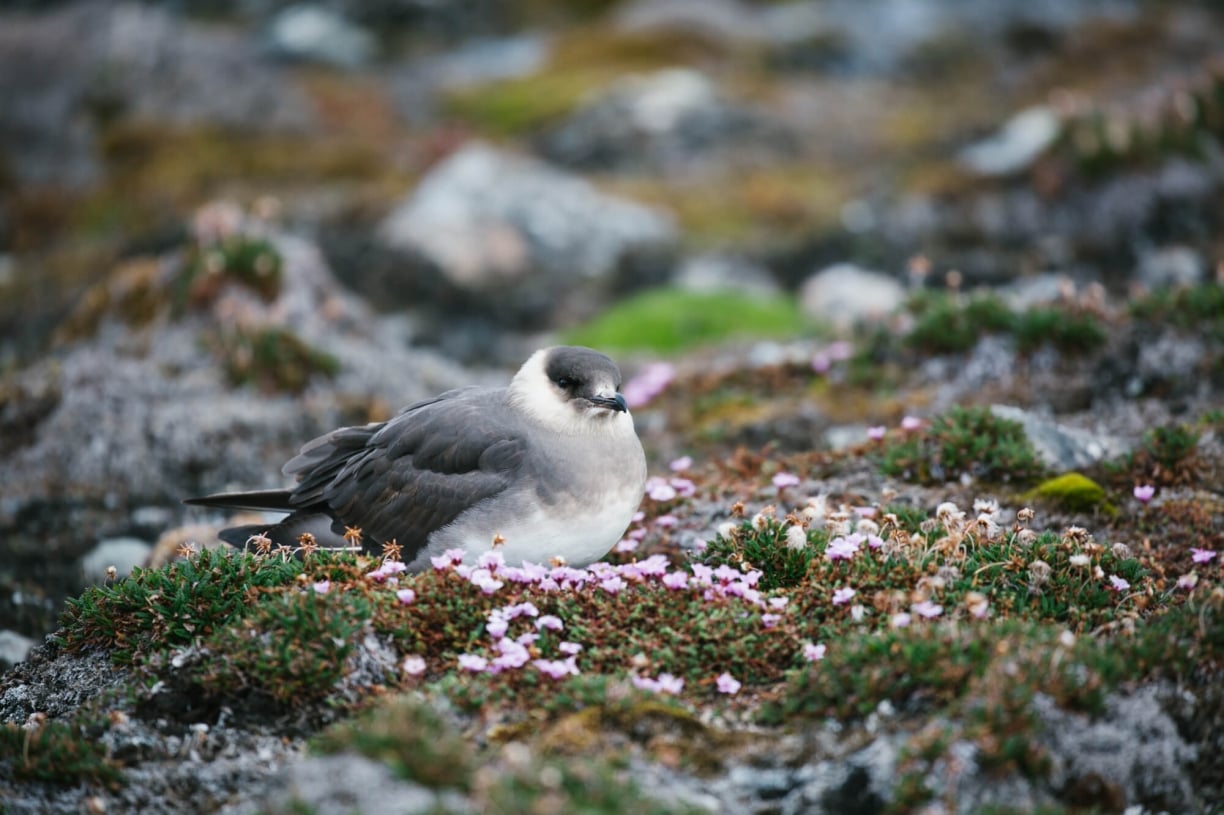 The majority of mammals in the Arctic are considered small, like the ground squirrel, lemming, and hare. Arctic foxes are also considered small, although they sometimes hunt rodents and birds, and scavenger the leftover seals from polar bears. Lemmings eat grass and moss, and Arctic hares look for woody polar plants. 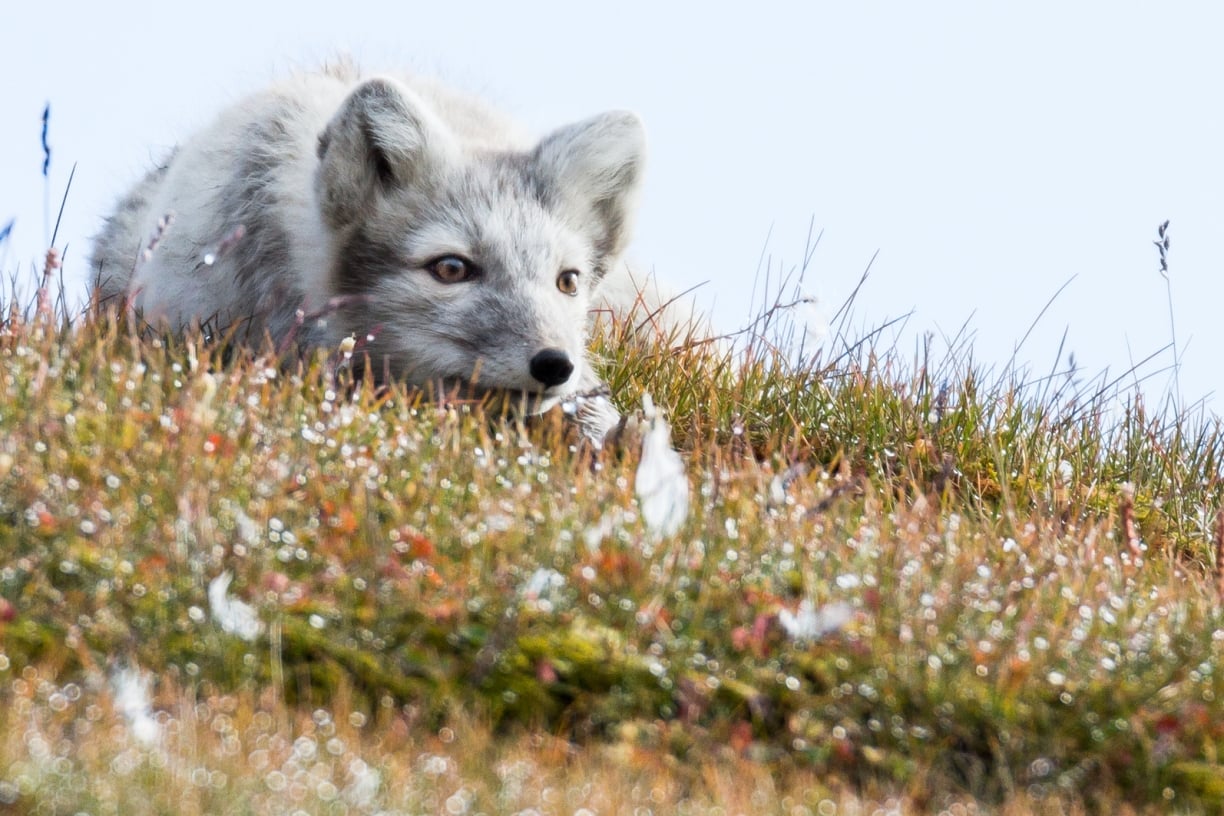 Some examples include reindeer, musk oxen, and wolves. Muskoxen and reindeer are both herbivores, grazing on grass. Arctic wolves will hunt them or smaller mammals as they are predatory carnivores. Polar bears are the only animal predators of Arctic wolves. 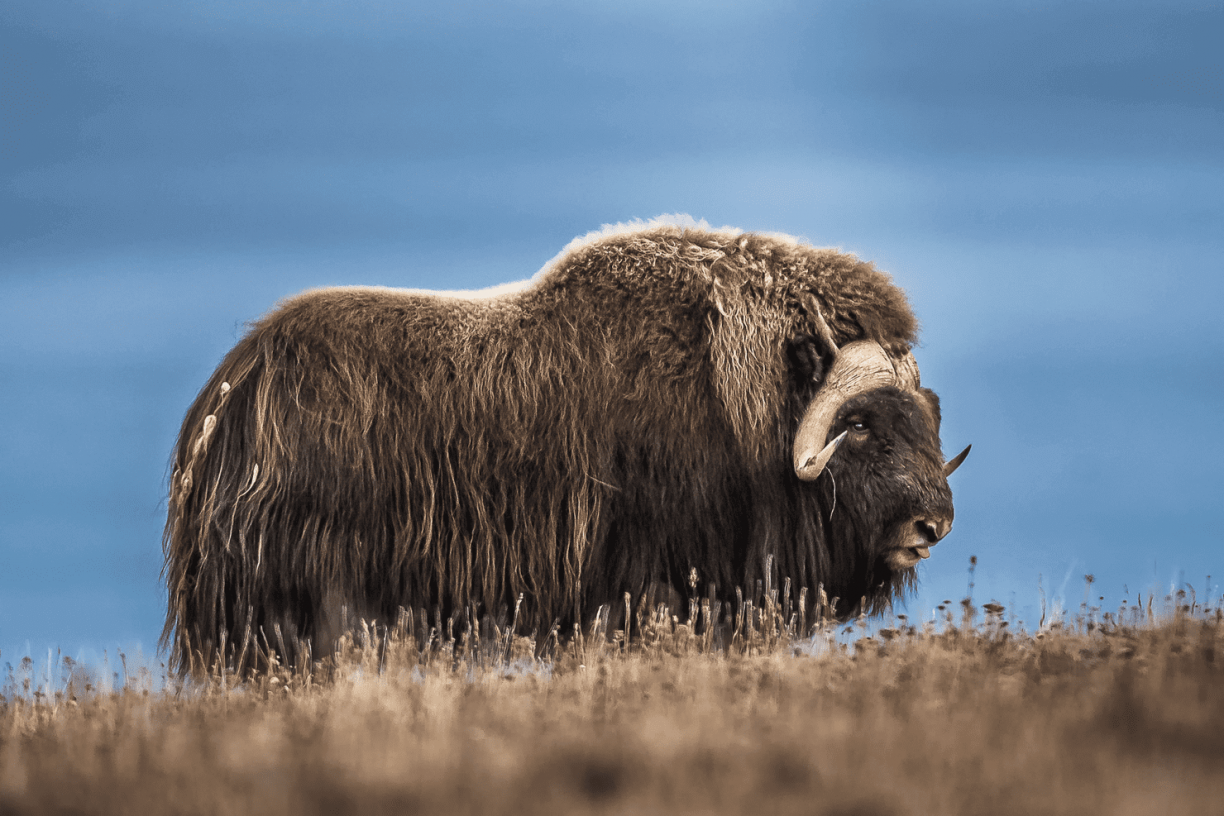 Polar bears mostly target ringed and bearded seals, waiting for them near the holes in the ice to catch the seals coming up for air. They can also stalk birth lairs and approach seals from water or on land. They might also target walruses, small rodents, birds, and even eat vegetation when food is scarce. 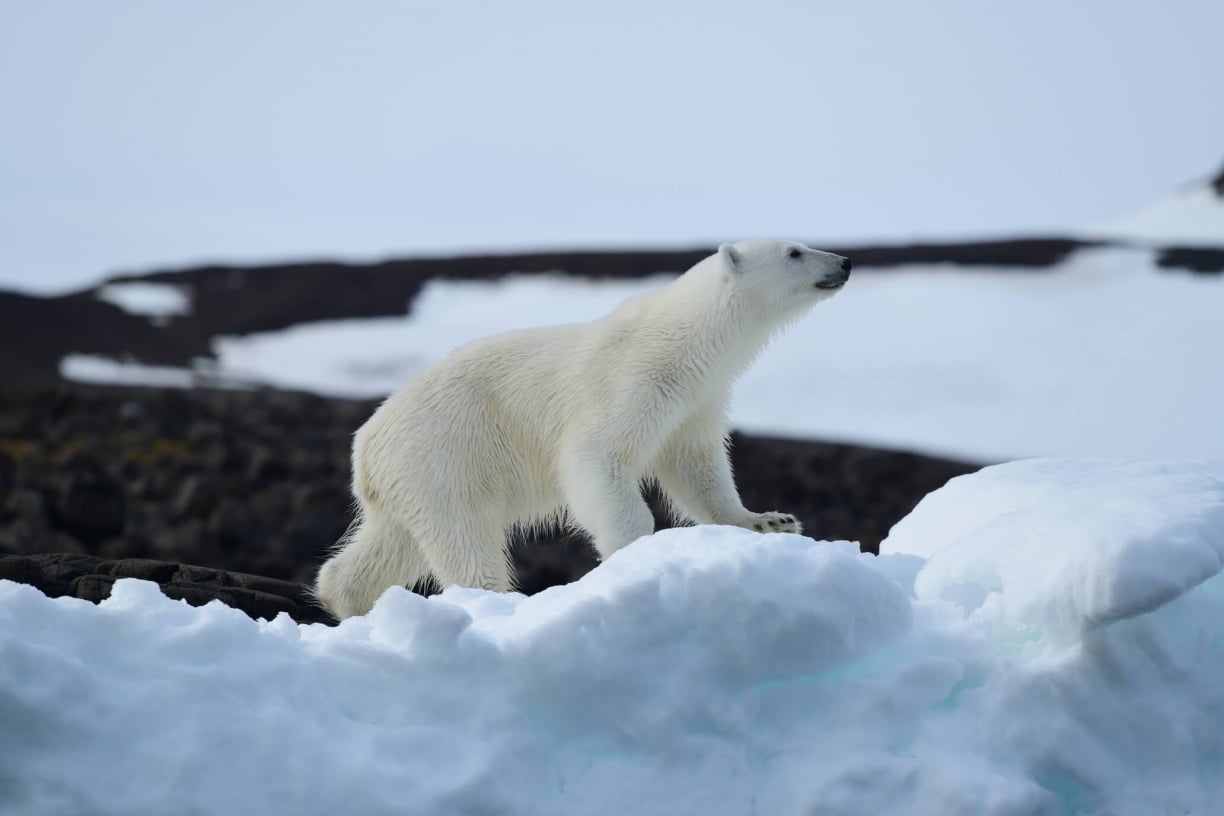 Why are primary producers so important in the Arctic marine food web?

The whole ecosystem is interconnected, and producers constitute the essential foundation of it. They are able to turn sunlight into energy to later transfer it from one organism to another, driving the movement of nutrients upward. Without producers, there would be no consumers, and the cycle would fall apart.

What is the role of polynyas in the Arctic food web?

Polynyas are open-water areas surrounded by sea ice that do not close up during winter. As soon as the polar night period ends and the sun starts appearing above the horizon again, these uncovered areas can start receiving sunlight, which triggers the early blooming of phytoplankton. From there, the sun's energy is being transferred to the top of the food chain. Polynyas can also be seasonal, occurring at the same places each year, which is convenient for polar bears, walruses, or seals that can choose not to migrate.

How would the extinction of one of the species on the food web affect other species?

The balance of the food web is quite delicate, and if there are not enough alternative connections to substitute the relationships these species had with the animals on other levels, the ecosystem might start experiencing changes. The loss of a predator, for example, has the potential of causing a trophic cascade, when its prey starts growing in numbers, and the species they consume are dwindling down.

Why is it important for food webs to have many different connections?

A complex food web has a lot of alternatives for food sources for higher-standing species as well as a wider range of consumers to keep the population in check. Any external factors that may influence the involved animals, like global warming or human-related threats limiting their food and resources, can have a dramatic effect on the web unless it is versatile.

What would be the downside of having a very simplified food web?

A simplified web will suffer if one of the producer elements is removed or limited. For example, if the krill in the ocean becomes depressed in numbers, the population of predators that rely on it for food can also start seeing a decline. And if there is no versatility in tertiary consumers, say, due to extinction of certain species, the consequences can not only affect the web itself but the whole ecosystem of the area.