Poseidon Expeditions Partners With Oceanites, which Documents the Changing Environmental Impact on Penguins

PROVIDENCE, RI, Feb. 11, 2020 – Poseidon Expeditions, the specialist in active adventure cruises in the polar latitudes, recently entered into a supportive relationship with the nonprofit organization Oceanites to help monitor and analyze penguin and seabird population changes over time in the Antarctic Peninsula.

This is the first season in Antarctica (2019-2020) that Oceanites and Poseidon are working together. Through an in-kind donation of space on several Poseidon voyages each year, Oceanites (https://oceanites.org/) is able to bring researchers to Antarctica to carry out its work in counting and documenting nesting birds at established sites.

During the cruise Poseidon Expeditions helps to both orchestrate an auction to raise money for Oceanites and provide information on Oceanites’ work to generate additional donations from passengers. In turn, while on a cruise with Poseidon, Oceanites researchers present an evening slide show about their work and the changes they are witnessing in penguin populations and the environment. 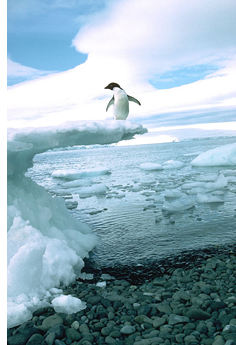 “For 25 years Oceanites has been an important partner of the Antarctic scientific community, working on the front line to provide vital statistics on penguin populations at the Antarctic Peninsula,” said Steve Wellmeier of Poseidon Expeditions. “Our passengers really appreciate the opportunity to learn firsthand about penguins and changes affecting various colonies. They return home with a much better understanding of the White Continent and the need to preserve its unique ecosystem.”

“Oceanites’ longstanding credibility promotes a better understanding of the singular issue of our time — adaptation — because Antarctica and its penguins are incubators foretelling our planet’s future,” said Oceanites founder and principal, Ron Naveen. A former Antarctic expedition leader, Naveen began his love affair with birds when he was 14 years old. He became enraptured with penguins and their unique challenge being on the front lines of climate change. 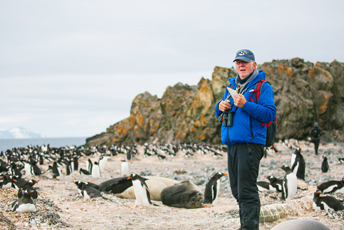 Oceanites uses penguin population trends to focus public attention on climate change ‘winners’ and ‘losers’ and whether penguins – and humans can adapt to a warming future.

“This is the world’s only publicly supported, scientific research initiative in Antarctica,” explains Naveen. The US-based, tax-exempt nonprofit §501(c)(3) organization has been driving science-based conservation under the Antarctic Treaty for more than two decades (since 1994).

Over the years, Oceanites has supported successful efforts to establish both general guidance for all Antarctic visitors and a series of site-specific management guidelines.

“Climate change is real and the most important challenge facing mankind today. We just want more people to get outside and smell the guano and then to become a part of the conversation and solution,” said Naveen.