What is the Fastest Ocean Animal in the World?

Imagine yourself on the deck of a small comfortable expedition ship, cruising the beautiful polar regions and looking out into the ocean. It’s a beautiful and sunny day and the waters are rather calm. You’ve got your binoculars handy for rare seabird spotting and, if you’re lucky, you might even get to see whales peeking out from below the water surface. But could you imagine the hustle and bustle that’s going on right below you underwater, while you spend a calm day on deck? With thousands of aquatic species living and travelling the oceans, some of them move incredibly fast. Keep reading and find out about the ocean’s record holders for fast swimming, deep diving and distance traveling! 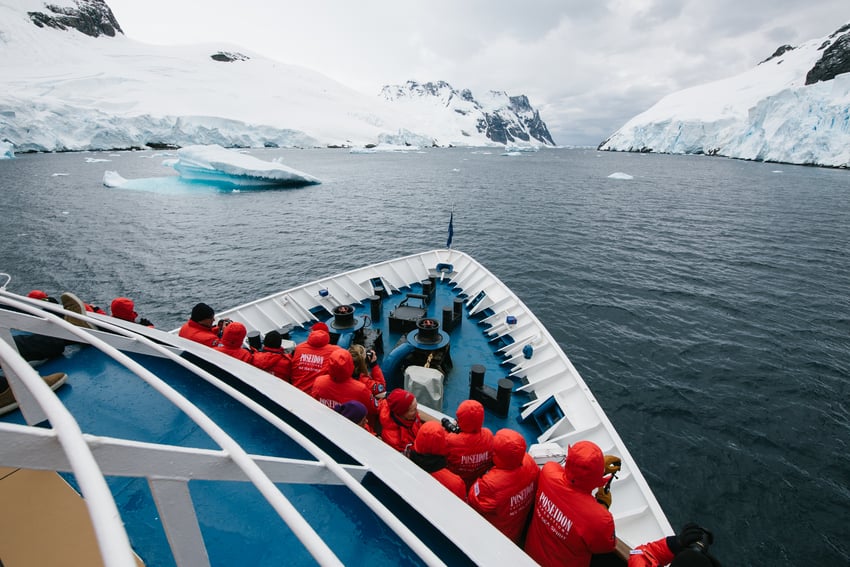 It’s hard to believe, but some marine animals cruise through the oceans at incredible speeds (not unlike a fast car ride). Learn about the fastest sea creatures in our top 10 list below.

Pilot whales, also known as pothead whales thanks to their bulging and round foreheads, are similar to dolphins and killer whales. They divide further into long-finned and short-finned representatives of their species with a very similar appearance aside from their flipper length. Reaching moderate speeds of up to 32km/h (20mph), these marine animals travel the oceans in large groups in the dozens and hundreds. Female pilot whales can weight up to 2,3 tons and live up to 60 years, while their male counterparts reach only about 1,3 tons and live up to 45 years. Short-finned pilot whales are present around the world in all oceans, except the Arctic. Long-finned pilot whales are not found in tropical waters. And they’re really good eaters. Did you know that they consume up to 30kg (70lbs) of food daily?

Featuring a sword-like bill and an elongated back fin, the black marlin can reach a length of ca. 4.6 m (15 ft). While it may be just a fisherman’s tale (and an exaggeration), one of its kind was presumably recorded at a speed of 132km/h (82mph)! Generally, the black marlin is known to travel at more leisurely speeds of 36km/h (32mph). While females can reach up to 11 years of age, males have a much shorter life span of only 5 years. Preferring shallow waters, black marlins rarely swim deeper than 30 m (ca. 100 ft) and stay close to coral reefs and islands of tropical and subtropical waters. You’ll find them predominantly in the Indian and Pacific oceans. Did you know that a black marlin’s age can be determined by looking at the growth rings on the spine of its dorsal fin?

There are at least 40 species of flying fish. At only 15-51cm (6-20in) in length, the four-winged flying fish can reach speeds up to 56km/h (35mph). Is it a fish or bird? Its appearance and behavior can fool you at first. This fellow doesn’t only stick to water; with its wing-like pectoral and pelvic fins, it can glide above the ocean surface for up to 200m (650ft). Flying fish live to around 5 years on average.

Also called orcas, killer whales can swim as fast as 56km/h (45mph). Coming in second after their relatives the dolphins, orcas are among the fastest marine mammals. They can reach a length of 5.8m (19ft). Don’t let their name fool you, killer whales aren’t dangerous to humans. In ancient times, sailors spotted them hunting whales in groups and thus called them “whale killers.” Orcas do not only feed on whales but on a variety of other ocean animals, such as fish, penguins, sharks, seals and even sea birds. You can find them in all the world’s oceans, from the Arctic to Antarctic waters. And they have more in common with humans than you’d expect! Orcas are one of three species in the animal world that go through menopause. And did you know that male orcas are real mommy’s boys? According to Dr. Emma Foster, a marine biologist at Exeter University in England, male orcas often stick to their mothers, who help their sons with foraging and protect them from other males!

Bonitos have a tuna-like appearance and come in eight different species. The distinctive striped pattern on their sides makes them stand out from similar fish. At 1.2m (48in) in length, they can reach up to 64km/h (40mph) and usually travel in large schools.

A tad slower than its relative the yellowfin tuna, an average bluefin can reach up to 69km/h (43mph). With lengths of up to 4.6m (15ft), bluefins are among the largest of their kind. While their average lifespan is up to 15 years, some were recorded to have reached over 35 years of age. As great aquatic migrators, they can be found in the Mediterranean Sea, Pacific, Atlantic and Southern Ocean. And they know how to stay warm in the cold waters of the oceans! With a specialized blood vessel structure, they can keep their body temperature at warmer levels than the cold water surrounding them.

You may know this fellow as ahi tuna from your local sushi restaurant, it’s a species that’s endangered by overfishing worldwide. This dark blue, torpedo-shaped fish with yellow sides usually travels in large schools of various other tuna species, reaching speeds up to 74km/h (46mph). With a lifespan of up to 8 years, this marine animal can reach a length of up to 2m (7ft). Yellowfin tunas migrate actively, which is why you’ll find them throughout the Atlantic, Indian and Pacific oceans.

Considered to be the fastest shark in the world, with a length of up to 4.5m (15ft), the mako shark can reach speeds of up to 74km/h (45mph). It owes its speed to remarkable features that are copied by designers of ergonomic swimsuits. Mako sharks have unique tooth-like scales that reduce drag in water and make them faster. Their scales also protect them against predators and parasites. Mako sharks can reach up to 30 years of age. But beware! Watch out for this marine animal. Shortfin makos have a low temper with people swimming around them and have occasionally attacked humans.

Named after its defining feature, this ocean creature uses its sword-like bill to slash, cut and thus slow down its prey. The swordfish can be up to ca. 4.3m (14 ft) in length and reach a speed of 97km/h (60mph). Did you know that the swordfish enjoys its solitude? It often travels alone, has few natural predators and can live up to 9 years. The greatest threat of swordfish are trophy hunters and fishermen. You can find this majestic creature in the Atlantic, Indian and Pacific oceans, from tropical to cold waters.

Recorded at speeds of 110km/h (68mph) during leaps out of the water, this distinctive fellow boasts a large sail-like dorsal fin on its back. It uses it to sail swiftly through the waters of the Atlantic, Pacific and Indian oceans, hunting on prey like squids and crustaceans. With a length of ca. 3.4m (11ft), the fastest sea animal in the world and close relative of the black marlin also features a sword-like bill. Sailfish can live up to 15 years, but the ones caught and released by sport fishermen only have an average lifespan of 5 years. Even if released, the trauma from handling and pulling it out of the water for victory photos deprives it of oxygen and damages the delicate slime coat that protects the fish from parasites.

It’s not all about the fastest swimming animal; there are also several record holders of deep diving among marine animals. The beloved icon of Antarctica, the emperor penguin, can dive down to 535m (1,755ft) to feed on prey and, hold your breath, stay underwater up to 27 minutes! 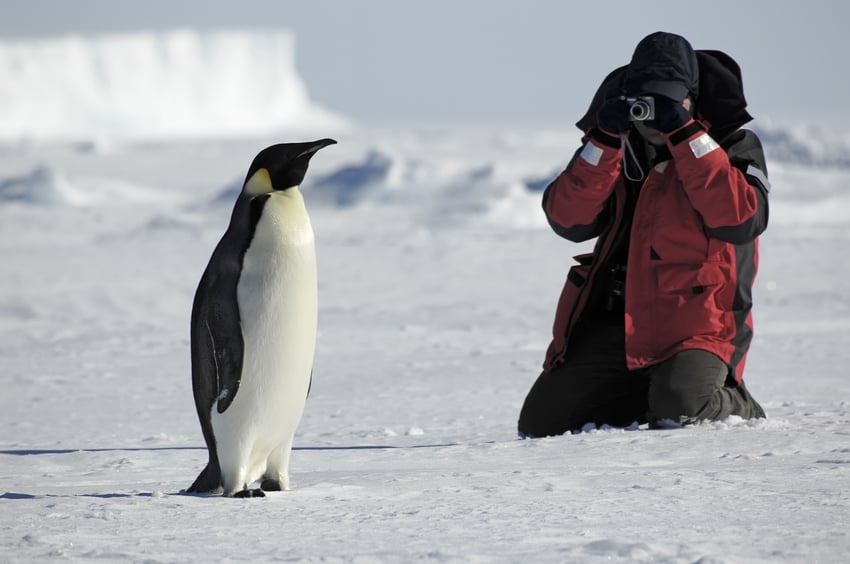 Elephant seals, our large iconic pinnipeds of South Georgia Island, can dive to depths of 2,388m (7,835ft) and stay underwater for over 60 minutes at a time! The large volume of blood in their massive bodies and higher levels of myoglobin allow for optimal storage of oxygen in their muscles for their long dives. The record holder among ocean animals in both depth and length is the cuvier’s beaked whale with a dive of 2 hours and 17 minutes to depths of 2,992m (9,874ft).

Cute and beloved by many, dolphins are also the fastest among marine mammals in the world. At 60km/h (37mph) they can out-swim their orca cousins, who reach only 56km/h (45mph). 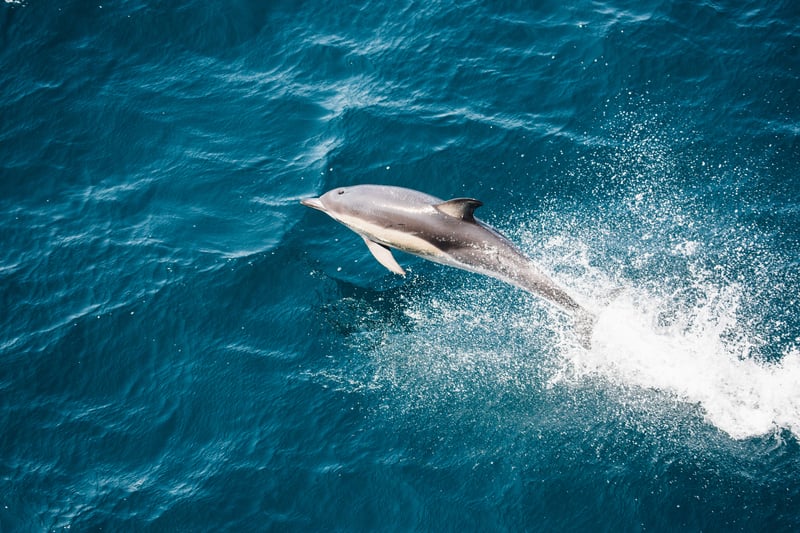 Unlike fish, dolphins are mammals and don’t have gills. That’s why you can see them leaping out of the water to take a breath and for navigation, to get rid of parasites, non-verbal communication during hunting and simply for fun. With over 42 subspecies, they are found all over the world in different habitats. Most dolphins live to an average age of 7-10 years, but there are a few record holders in the world. Nicklo, a wild dolphin in Florida, lived to be 67 before his presumed death in 2017.

You may consider yourself an avid world traveler, but migrating patterns of humpback whales may put your travel history to shame. Humpback whales are present in all the world’s oceans and travel incredible distances of up to 8,000km (5,000 miles) each season. 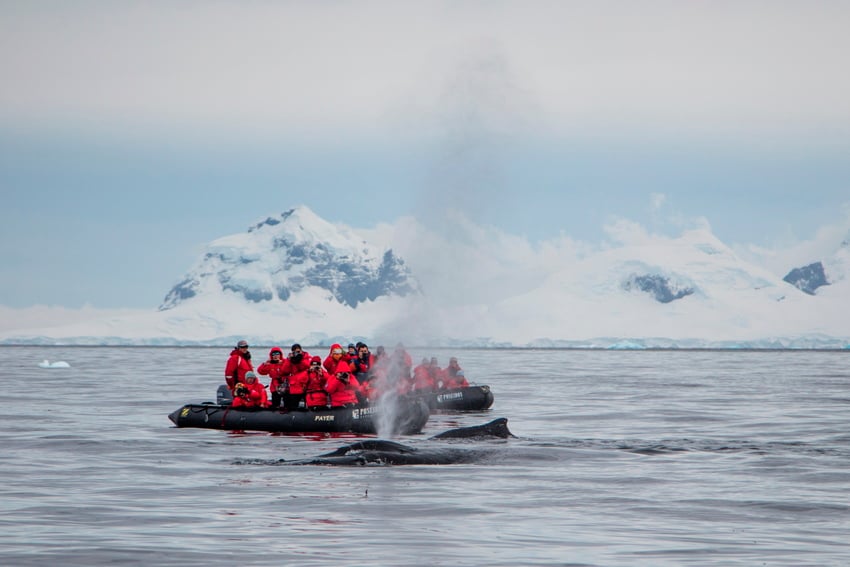 Winter is their time to mate and calve in tropical areas near the shores, while summer months are reserved for moving north to feed in colder waters. As true migration masters, they cover great distances in no time...4,800km (3,000 miles) in 28 days are not unheard of. You can spot them in both the Northern and Southern Hemispheres

They may look cute and clumsy on land, but once they reach water they become unstoppable torpedo-shaped swimmers and excellent divers. Their ergonomically-shaped bodies reduce drag in the water and allow them to dart through the ocean effortlessly. 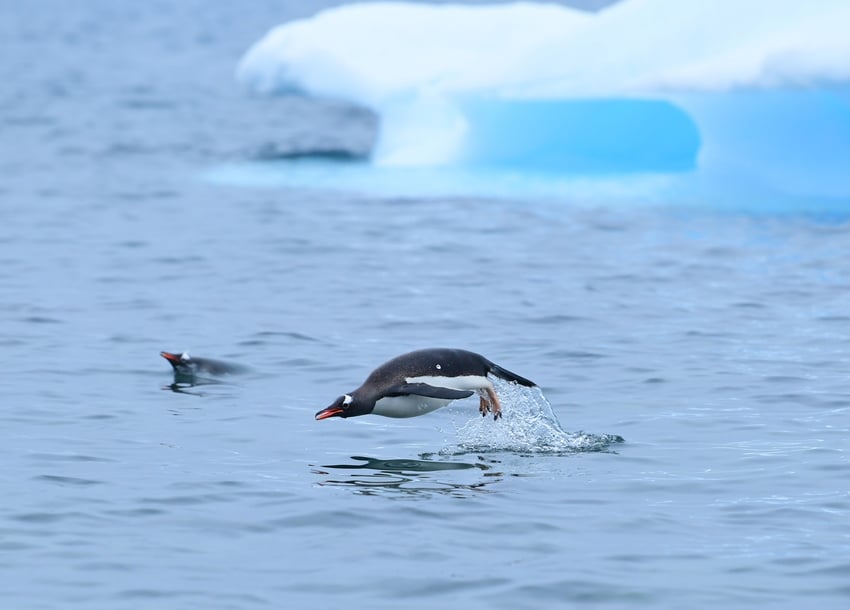 Their wings are actually called flippers and function as propellers for extra speed. When swimming underwater, penguins tuck their webbed feet close to their tails for better navigation. Gentoo penguins are the fastest of them all with an underwater speed of up to 36km/h (22mph)!

Is a sailfish faster than a cheetah?

Cheetahs can reach a maximum speed of up to 130km/h (around 80 mph), whereas sailfish were recorded swimming at only 110km/h (68mph).

What is the fastest animal in the world (including land and sea)?

The absolute record holder in the animal world is the peregrine falcon with a flying speed of up to 320km/h (200mph) when dropping from the sky to strike its prey. On land, the fastest animal worldwide is considered to be the cheetah with sprints of up to 130km/h (around 80 mph). Underwater, the sailfish holds the record as the ocean’s fastest animal with speeds of up to 110km/h (68mph).

What is the fastest thing on Earth?