In the morning we disembarked aboard Zodiac landing craft for a visit to Half Moon Island in the South Shetlands. We had arisen an hour earlier to a light refreshing breeze, fresh pastry in the ship’s library, a milky green sea and fog on the horizon. 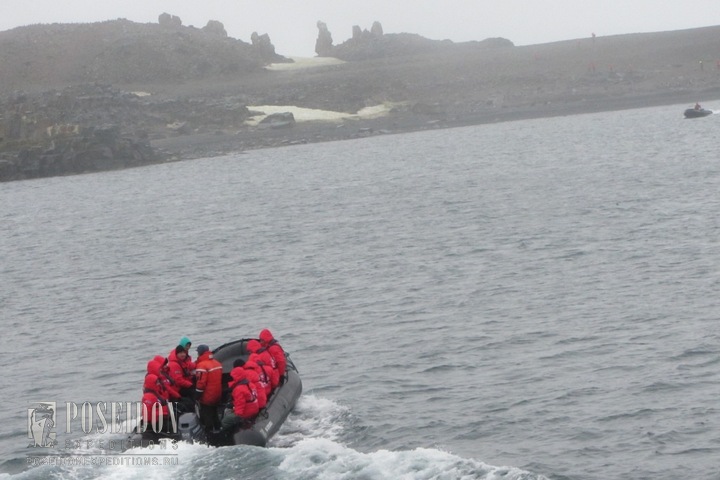 While we were having breakfast, the weather changed: the fog crept in, the sky clouded over and it started to rain. As we prepared to disembark, the wind picked up and the sun disappeared. But just as the last group was disembarking, the weather changed again and the sun returned. It was a good example of how quickly conditions can change at the Antarctic Peninsula, something the captain and expedition team are always alert to. 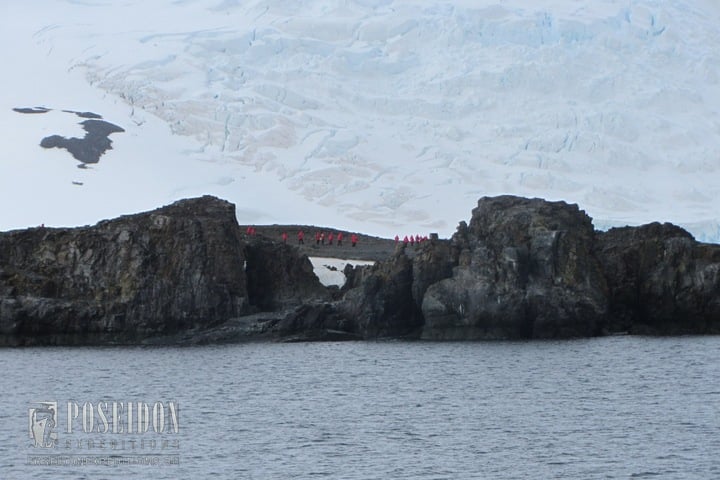 We were again happy to have the opportunity to get off the ship and experience the sights and sounds of Antarctica. There are many Gentoo and Chinstrap penguins on Half Moon – an inexhaustible source of cheer and positive energy. They honk, fight, run around and slide on the snow. They are fidgety, always doing something; who knows what they’re thinking? The local fur seals are just as unwelcoming as the ones from yesterday, probably relatives.

After lunch, a lecture awaited us about snow, ice, glaciers and ice sheets – so, everything we might want to know about frozen water.

In the evening, we slowly traveled south to Deception Island – a submerged caldera with a relatively narrow entrance – and managed to navigate through the Bellows with no difficulty. There was light fog, but the water was still with no perceptible wind. 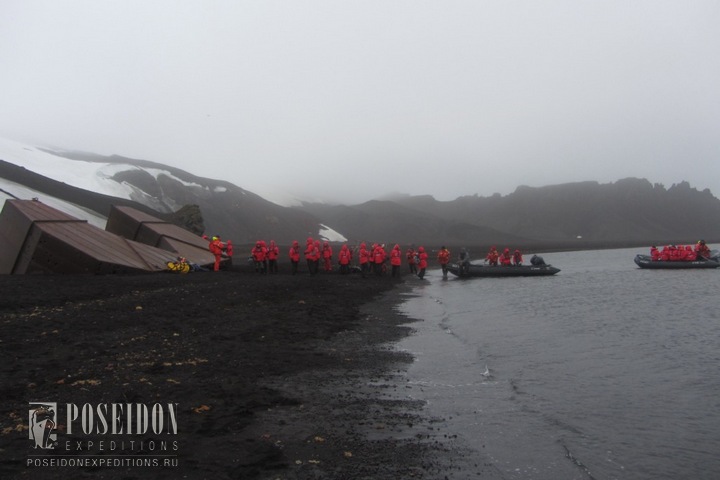 For me, Whalers Bay caused mixed feelings. Admiration on one hand: for nature, for the courage of the whalers from an earlier generation, for the power of the still-active volcano. On the other hand, the buildings, rusting fuel tanks and other remnants were ugly and surreal, and I felt some disappointment that those who built all of this didn’t feel the responsibility to remove it when they were done. Everything that’s man-made here seemed enormous and out of scale. Right along the shore, behind a huge rusty object shaped like a horseshoe all covered in holes, there were three fur seals. They were saving up energy by not moving and weren’t interested in us at all.

We divided into three groups and headed off in different directions. The lengthiest journey was to the top of a nearby hill. The 500-meter walk there was through the black volcanic sand, across a young stream, past some ram-shackled buildings, and around a small, forlorn cemetery where polar explorers who died in a mudslide were buried.

The second group reached an old plane hangar with some half-melted snow inside. They had to walk along the shore, past a few fur seals that were having some harmless fun picking on each other and weren’t really bothered with conserving energy like their wiser compatriots near our landing site. 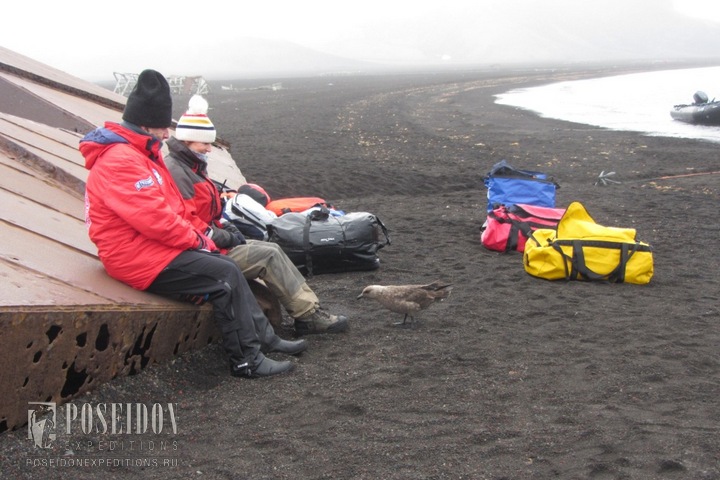 The third group went in the opposite direction, past a large pond with swimming skuas. Skuas are really amusing birds. Like crows, they are attracted to all things shiny and bright and are just as predatory and mischievous. One bird busied himself by trying to eat an anchor rope and another was picking at the boot of our expedition leader, Heiley, who was sitting still and trying not to spook the cheeky bird. After some time, the passengers felt that it was time to go – the weather was worsening and it began to rain and get windy. 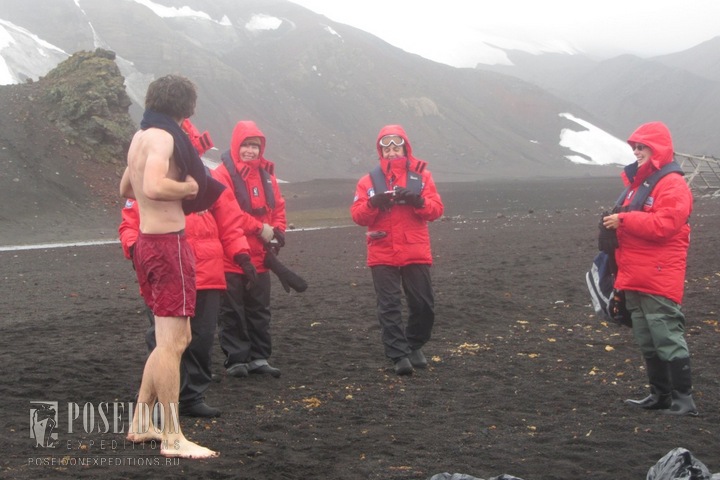 This, however, did not stop some brave souls from going for a swim in the waters of Deception Island. It is really a rare opportunity – to have a dip in the water along the shoreline warmed by the still active volcano underneath our feet. 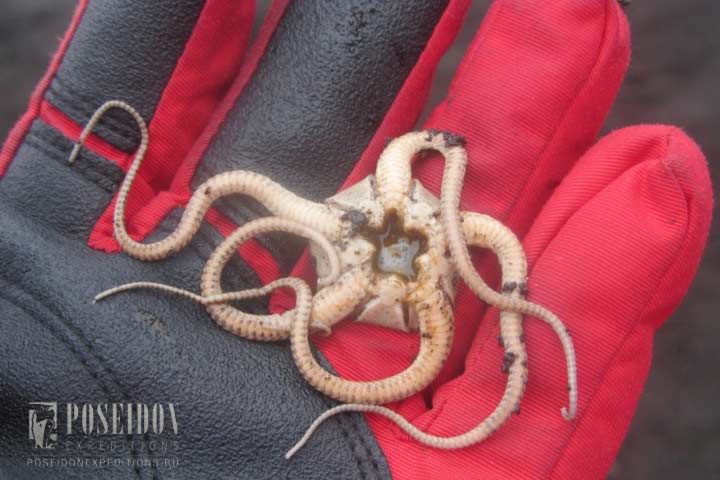 Our landing at Whalers Bay was a proper expedition in the sense of making some discoveries. Toward the end, I got lucky and managed to find some starfish and other creatures on the beach. I showed them to Jamie and he was so amazed that others wanted to have a look as well… It took an hour.

By the time we returned to the ship the weather got properly rough. But overall, we felt the landing had been a success, with everyone happy and enjoying their hot chocolate in the lounge. Tomorrow we enter the waters of the Antarctica Peninsula itself. We will have the opportunity to see icebergs, glaciers and ice caps, more colonies of penguins and, if we are lucky, a few whales off the side of the ship.

It’s all up to the God of Weather.