They’re not just an incredible sight, they’re saving our planet! Bright white glaciers reflect light and heat, keeping the Earth’s polar regions cool and our climate in balance. Forming over centuries, glaciers have witnessed a lot of climate history and help modern scientists look back in time. But unfortunately, we may lose this asset soon. Human activity and the industrial revolution have caused glaciers worldwide to melt and retreat rapidly since the 1900s, with increasing numbers of icebergs calving into the sea. According to scientists, we could witness an ice-free Arctic by 2040 if carbon dioxide and other greenhouse gases continue to be emitted into the atmosphere at present rates.

What’s the Difference between an Iceberg and a Glacier?

Any iceberg, small or big, was once part of a glacier. The largest glaciers on Earth are continental ones that stretch over wide areas in the Arctic and Antarctic, consisting of ice and debris like rock and dirt. A small glacier is referred to as ice field, while larger ones are called ice sheets. With rising temperatures and sunlight exposure, the glacier’s surface becomes brittle. That’s when that beautiful piece of ice you see floating in the ocean is born. Calving from the glacier into the ocean, the iceberg then starts its long journey, steered by the ocean’s drifting patterns and currents.

How are Glaciers and Icebergs Formed?

Majestic glaciers take centuries to form. Layers of snow continuously push down on previous layers, getting compacted through melting and sublimation during the process. As time passes the ice crystals become even larger and compress air pockets, creating dense ice – and glaciers are formed. An iceberg calves from a glacier when sunlight exposure or higher temperatures cause the ice to get brittle enough to break. While you can also find glaciers in mountains and valleys, icebergs normally only originate from large continental glaciers in the polar regions.

You may have seen a few gigantic icebergs floating in the sea (and what you see is only a small part, with 90% being under the water surface), but they’ll never come close to the mass of glaciers. Imagine of snow being deposited layer upon layer and being compressed into dense ice over hundreds of years. Some of the Earth’s glaciers are so massive that global sea levels will rise significantly if they melt.

A lot of snow is needed to form a glacier and a cold enough climate to keep it from melting away. Naturally, you’ll find glaciers in the mountainous regions at higher altitudes or in polar regions. Icebergs calve from glaciers in the polar regions, plunging right into the ocean. Their long journey then begins, wherever the current takes them, until they slowly melt once they reach warmer water. The usual lifespan of an iceberg is between three and six years. When icebergs hit shallow water and their underground body touches the seabed it’s called an ice scour, creating a so-called ice island. 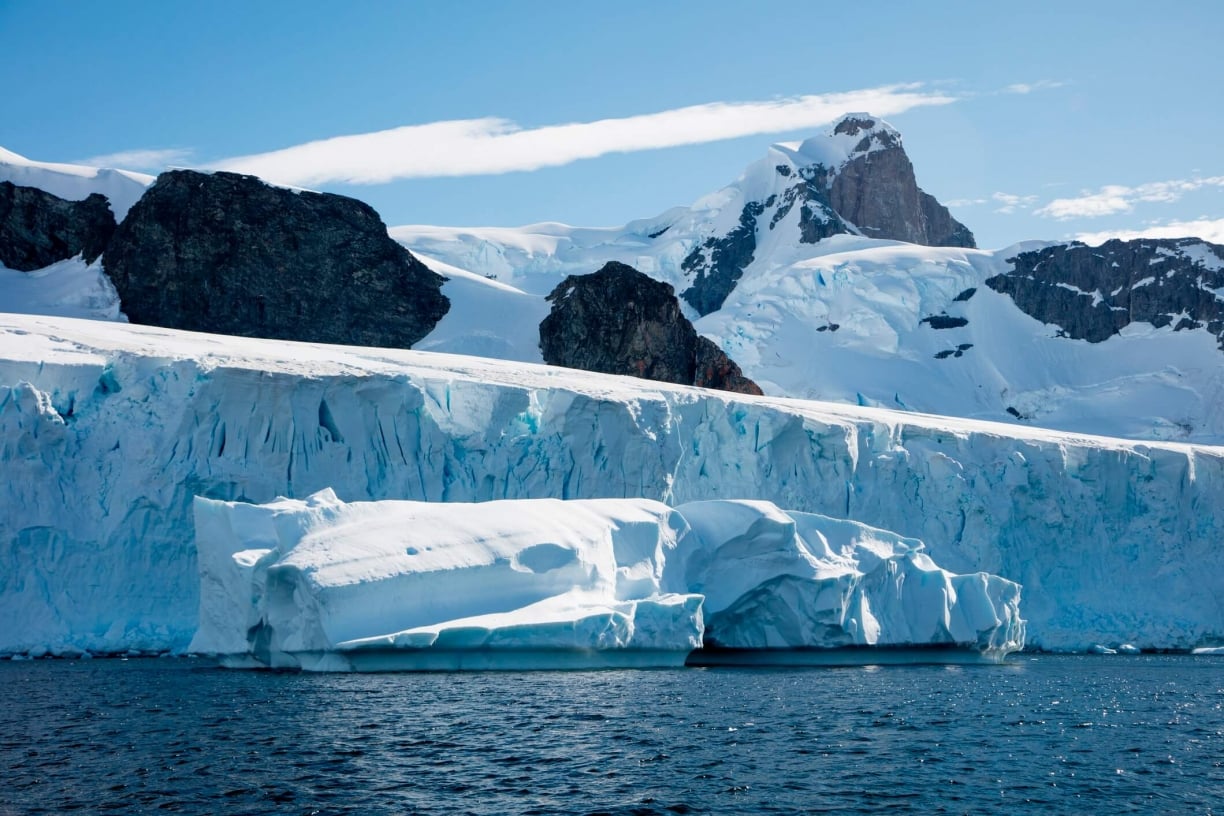 While a glacier is fully exposed with its entire mass visible in the open, the size of icebergs floating in the ocean is deceiving. Only 10% is visible above the water surface, with 90% extending below.

With water being denser than ice, icebergs are able to float. The air bubbles trapped in their ice also help. And since icebergs consist of fresh water, which is less dense than salty ocean water, they’re perfectly suited for their long drifts across the ocean.

Have you ever appreciated icebergs’ beautiful color spectrum icebergs? Some of these shades originated from the glaciers they calved from. Glaciers accumulate ground debris and airborne materials such as volcanic particles, which eventually get pressurized into the ice. The constant thawing and re-freezing of glaciers creates air pockets, which also create colorful patterns in the ice. Another factor is light reflection. If an iceberg you’re looking at is covered by dense snow, which reflects the wavelengths of light equally, you’ll perceive it as white. The blue hues come from the fact that frozen water absorbs longer wavelengths of light (yellow and red) rather than shorter ones (blue).

Why are Icebergs and Glaciers so Important?

Have you ever taken a sip of pure cold water on a hot day and wondered where your refreshment came from? The Earth’s glaciers feed streams and rivers, providing a steady source of fresh water for the world’s population. With glaciers disappearing, rivers and lakes would eventually also dry up. Given the centuries it takes to form new glaciers, we may run into severe water shortages if that happens. In theory icebergs could be used as source of drinking water in the future. But so far, it’s considered too costly and risky to haul them from the oceans. 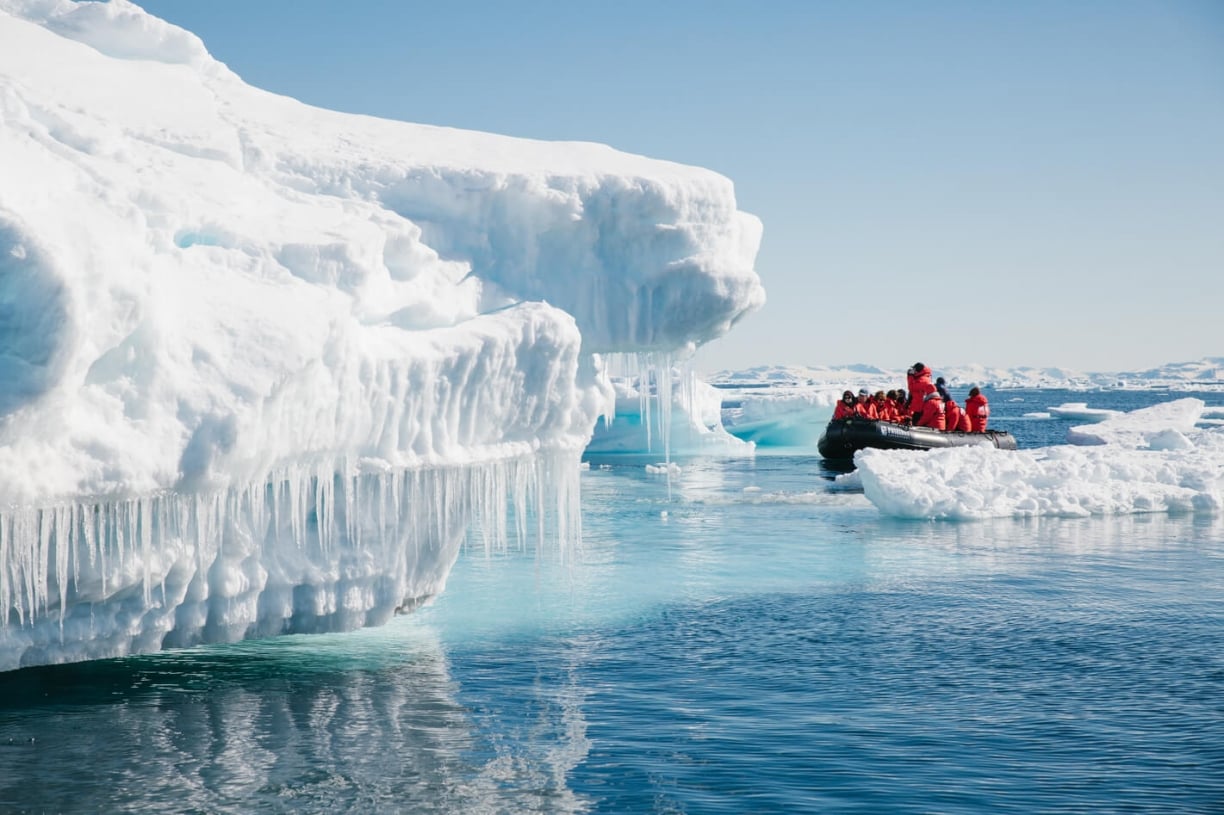 Beautiful Glaciers and Icebergs of the Arctic and Antarctica

Curious to discover these wonders of nature? On a cruise you’ll be able to see majestic glaciers, icebergs in all shapes and sizes and, if you’re lucky, you’ll even witness them calving into the ocean! Come up close enough to experience this natural miracle (but at a safe distance!) from aboard your small expedition ship, the Sea Spirit. Choose your perfect cruise to the Arctic or Antarctic to learn about icebergs and glaciers at our onboard lectures, join citizen science projects and photo workshops or simply enjoy stunning views from the deck. Find your adventure in our catalogue and contact us to plan your perfect polar expedition!

Is a glacier bigger than an iceberg?

Yes, glaciers are vast masses in mountainous and the polar regions, created over hundreds of years. Icebergs are pieces of ice that broke off glaciers.

Why do icebergs break off glaciers?

Rising temperatures and sunlight exposure make glacier surfaces brittle, which in turn causes a glacier to calve (creating an iceberg).

What is the bottom of an iceberg called?

The submerged part of an iceberg (bottom) is called a bummock, while the visible part on top is called a hummock.

Why is a glacier blue?

Ice absorbs longer wavelengths of light (yellow and red) better than shorter wavelengths (blue). That’s why an iceberg can appear blue to us.