At the beginning of the XX century several expeditions have made their way to the mountain ranges and glaciers of the Antarctic continent and it became a foundation for the preparation of the journey to the South Pole of our planet. In 1909 the Norwegian Roald Amundsen decided to make a difficult and dangerous crossing to the center of the icy continent. On the 14th of January, 1911 Norwegians landed on the coast of Antarctica in the Bay of Whales. At the same time another expedition has come to conquer the South Pole. That expedition was led by Robert Falcon Scott, who arrived in Antarctica just a few days before Amundsen. Amundsen intended route was shorter by 100 kilometers, than the one Scott has proposed, however, it ran through more challenging terrain. But Amundsen has calculated all the stages of the journey with amazing precision. 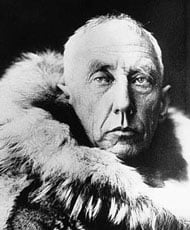 Between 80° and 85° on each degree he had prepared storage of food and fuel, and made sure that they were easy to find by setting a high pole with a flag at each of these storages. Amundsen’s trek began on October 20, 1911 with four companions on a sled pulled by dogs. During the 85th parallel began the difficult ascension on the ridge, which received a name the Queen Maud Mountains in honor of the Norwegian queen (later it was discovered that this range refers to the Transantarctic Mountains). As some part of the provision was already over, Amundsen ordered the killing of extra dogs to feed their meat to men and other animals because food reserves were running low. 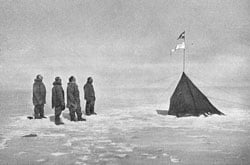 Amundsen at the South Pole

Norwegian expedition reached the South Pole on December 15, 1911. They had pitched a tent on a high plateau, a height of 2800 meters above the sea level, and there the Norwegian flag was raised. Roald Amundsen and his companions were the first people who have conquered the South Pole. On the 17th of December the expedition turned north. In order to survive they were forced to kill one dog every three days, so the people and the rest of the dogs were fed with the fresh meat until they reached the 85 parallel, where the first package of food was stashed. Having made the 2,800 km round trip, they returned to the Bay of Whales on January 26, 1912, after a 99-day ice hike.