Update:
As a result of the Russia-Ukraine conflict, Poseidon Expeditions has canceled or suspended until further notice our Arctic programs that travel into Russian territorial waters. Our Summer 2022 expedition cruises originally scheduled aboard the Sea Spirit for those waters have now been rerouted to other regions – Svalbard and Northeast Greenland. We continue to watch the situation carefully and will keep our website and communications with interested guests up-to-date.

Rarely visited today yet significant in the history of polar exploration, Franz Josef Land is worthy of its legendary reputation.

This extraordinary expedition to Franz Josef Land is as unique and authentic as the place itself. Starting in Longyearbyen in the Norwegian territory of Svalbard, we cross the icy, wildlife-rich Barents Sea to the Russian High Arctic. In Franz Josef Land we discover unparalleled landscapes, wildlife, and history in one of the wildest and most remote corners of the Arctic.

Back in Svalbard we have the opportunity to explore beautiful fjords and islands on the northwestern coast of Spitsbergen, Svalbard. Here we seek the full range of Arctic wildlife in one of the world’s most impressive polar desert environments.

Franz Josef Land, part of the Russian Arctic National Park, is a nature sanctuary. Polar bears, walrus, endangered bowhead whales, and other Arctic wildlife can be spotted anywhere, anytime in and around the archipelago. Svalbard is a similarly protected wilderness where we find flowering tundra and tidewater glaciers.

Steep cliffs and scree slopes in both island groups accommodate enormous colonies of nesting seabirds such as dovekies, guillemots, and rare ivory gulls. 24-hour daylight allows us to exploit every opportunity for wildlife viewing in this unique polar ecosystem. 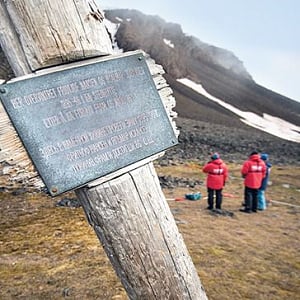 In Franz Josef Land we encounter a stark and enigmatic landscape steeped in the drama and heroism of early polar exploration. At places like Bell Island, Cape Flora, and Cape Tegetthoff we have the opportunity to walk in the footsteps of Fridtjof Nansen, Frederick George Jackson, Julius von Payer, and other polar explorers.

At Tikhaya Bukhta we find the ruins of a Soviet-era research facility that was also a major base for polar expeditions. Across the archipelago there are monuments, memorials, crosses, and the remains of makeshift dwellings, all testimony to incredible historical events.

On this voyage we also experience stunning scenery and abundant wildlife in Spitsbergen, Svalbard’s largest island. This classic Arctic destination is home to reindeer, Arctic fox, millions of seabirds, numerous marine mammal species, and a high concentration of polar bears.

In this multifaceted landscape of glaciated mountains and coastal plains we also find historical sites and the Arctic research community of Ny Ålesund, complete with gift shop, post office, and museum. 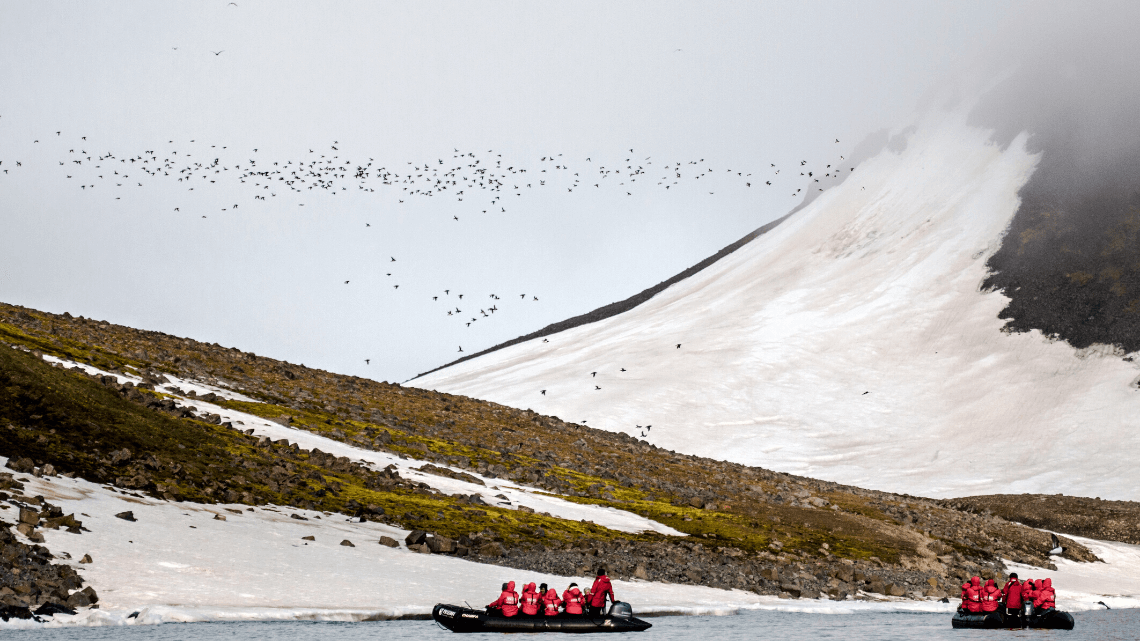 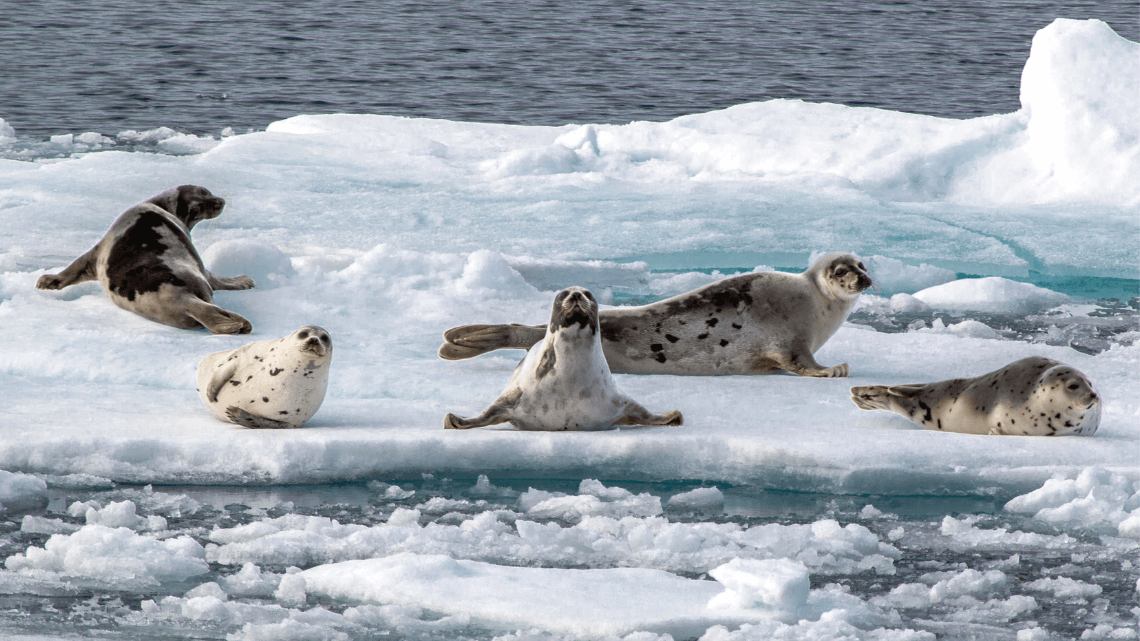 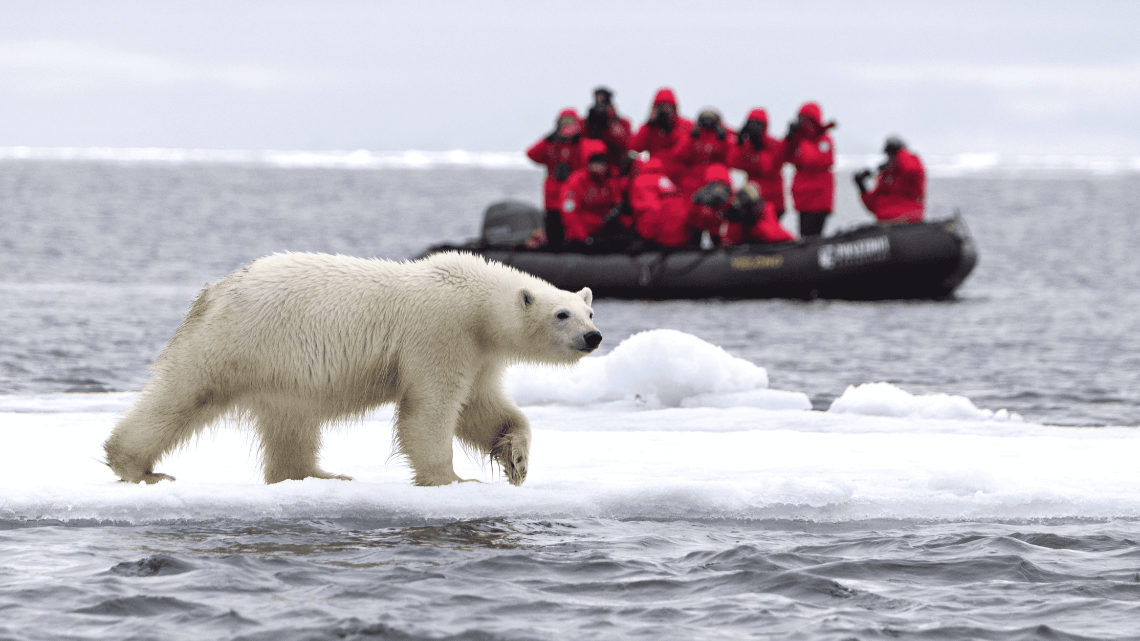 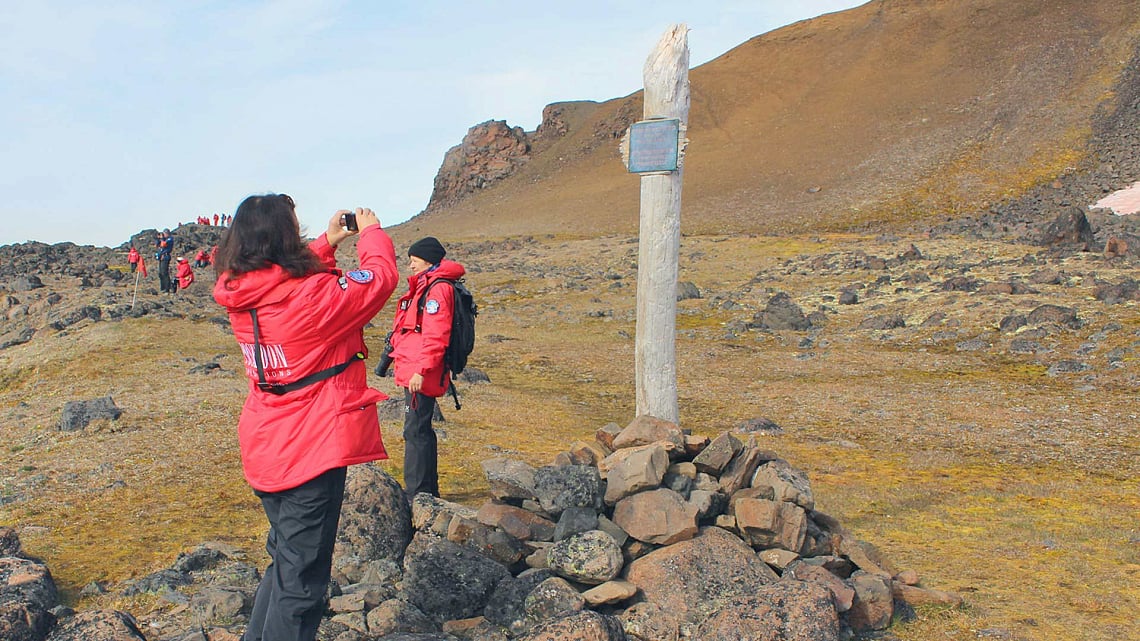 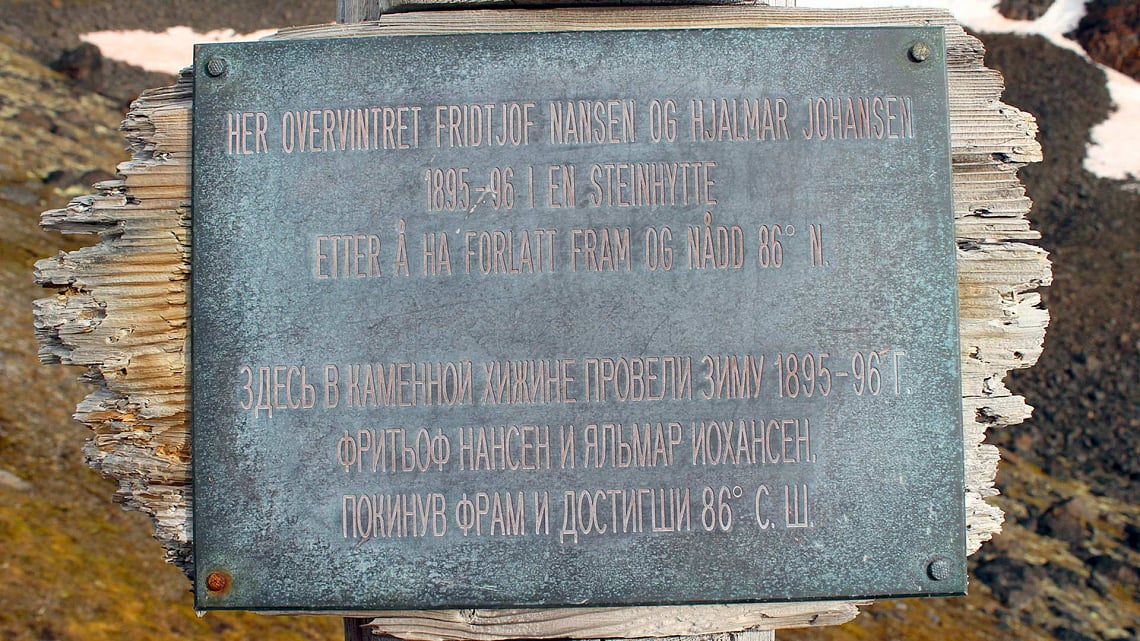 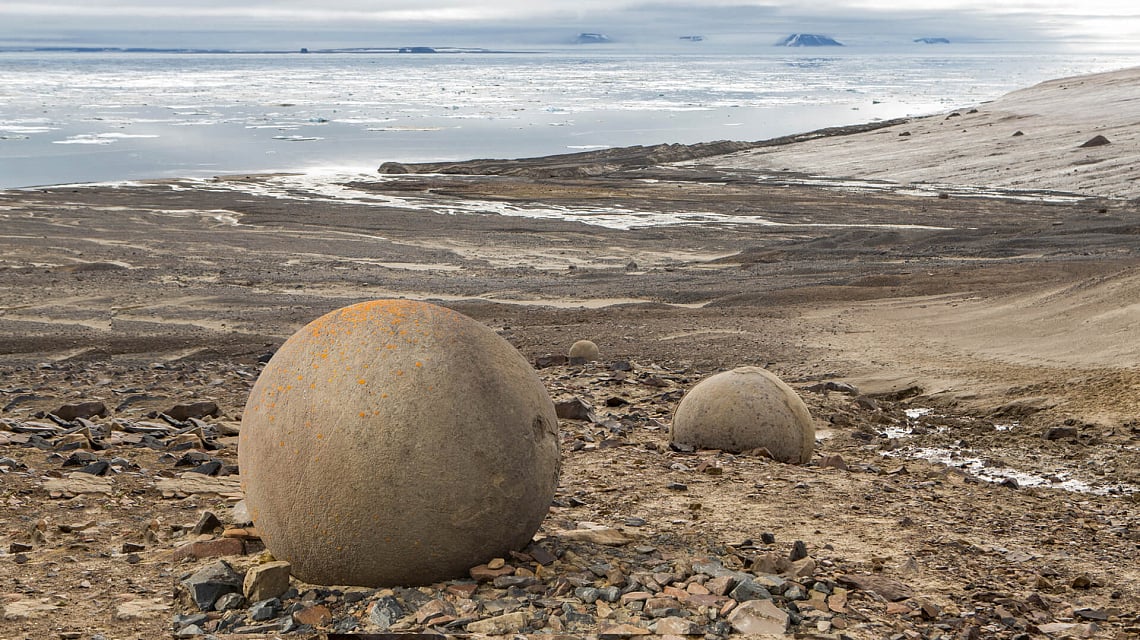 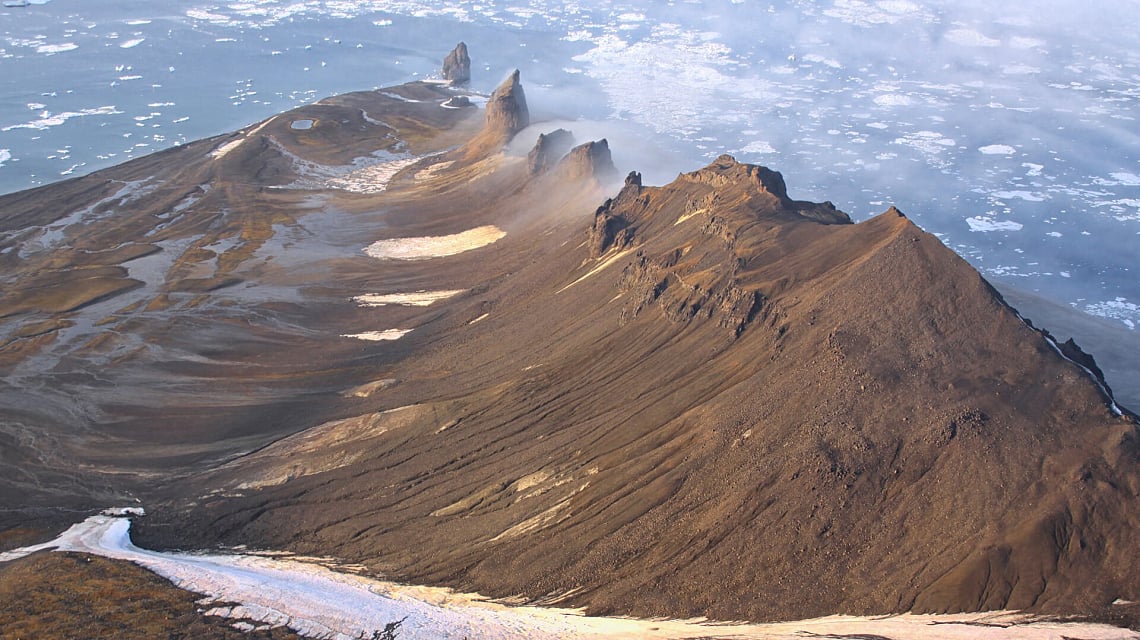 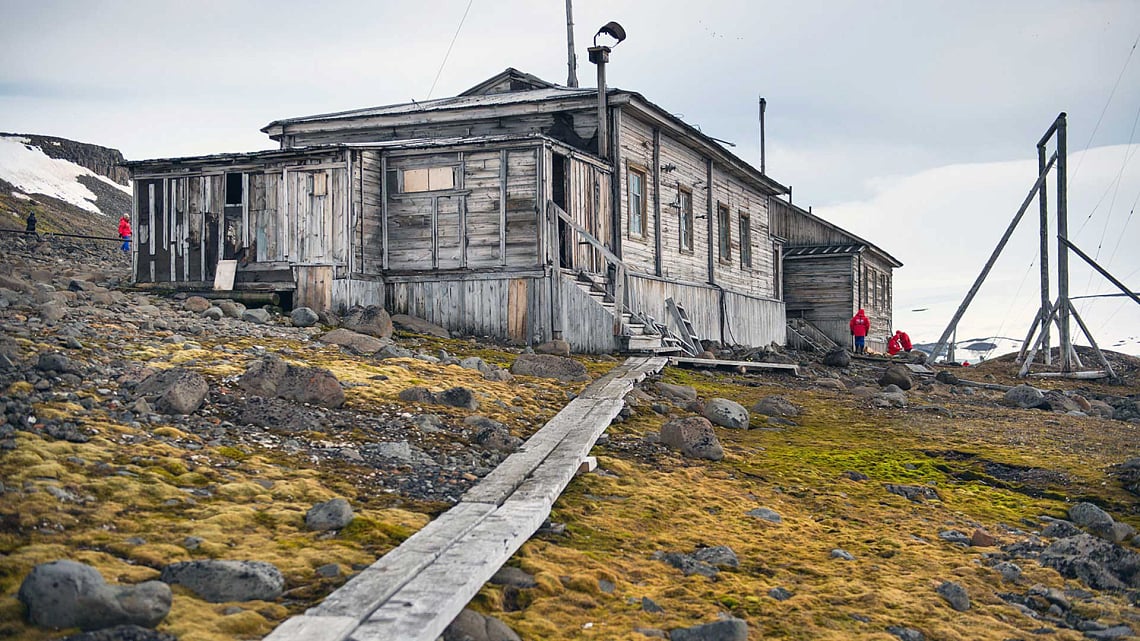 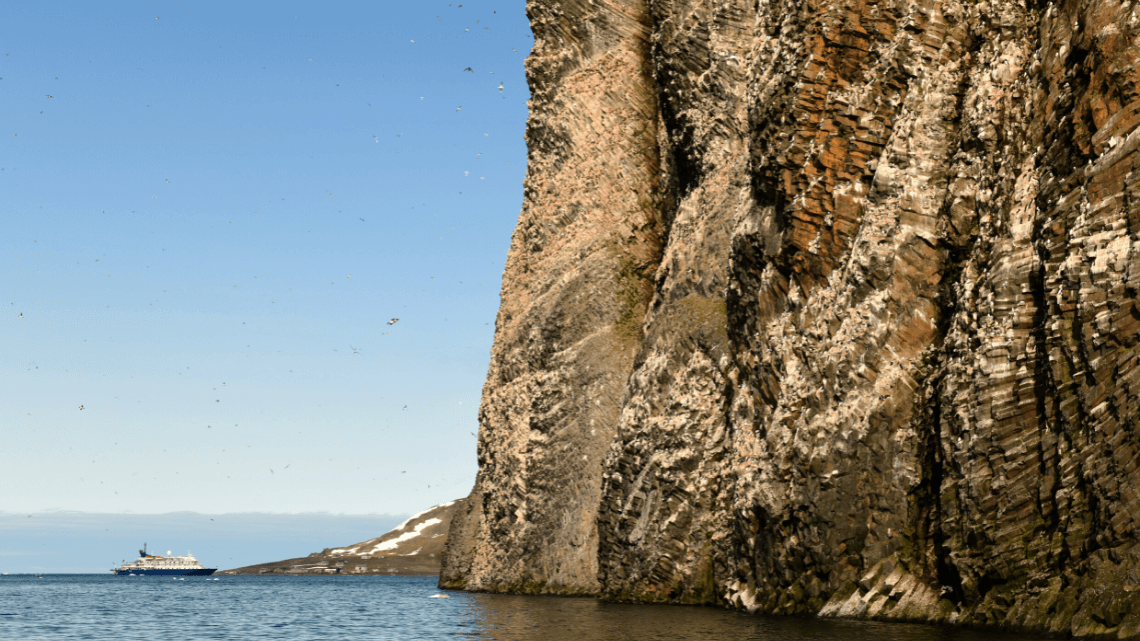 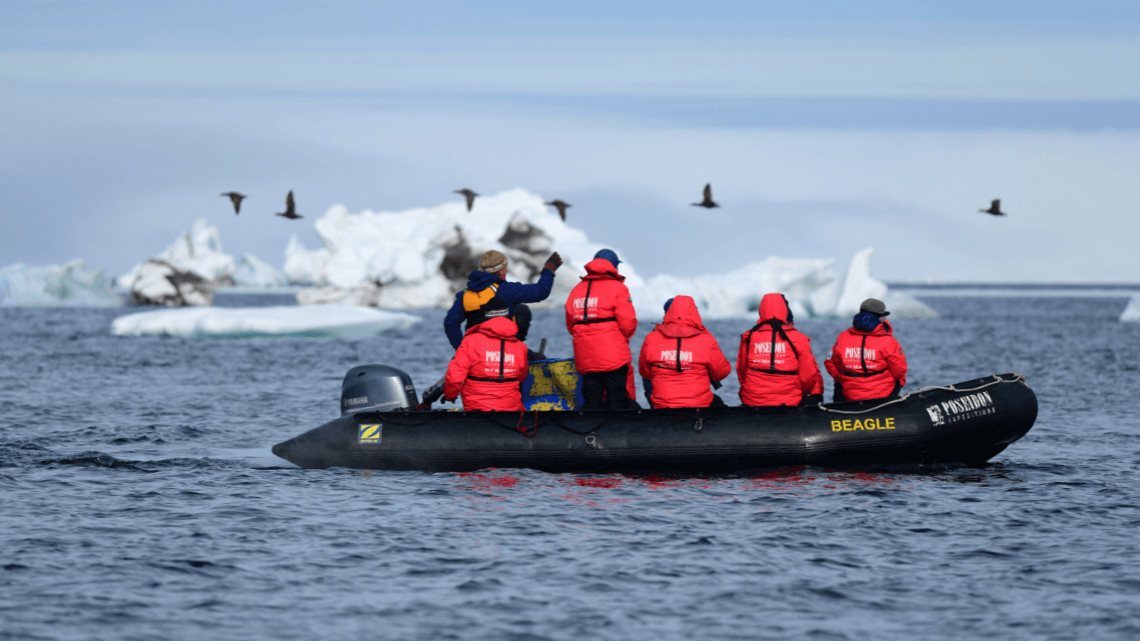 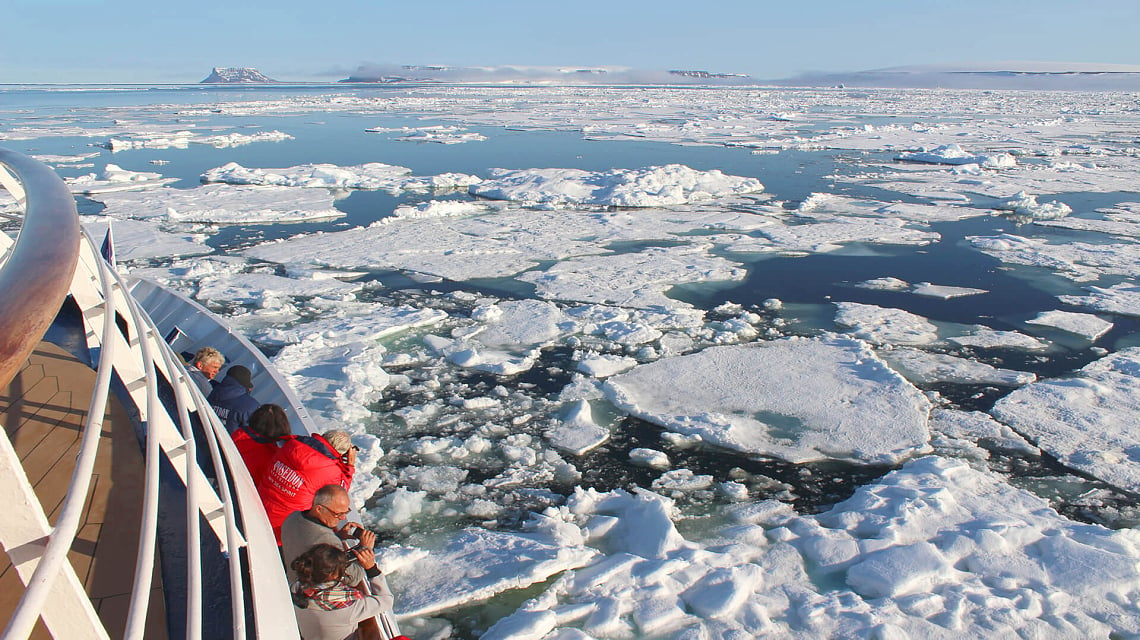 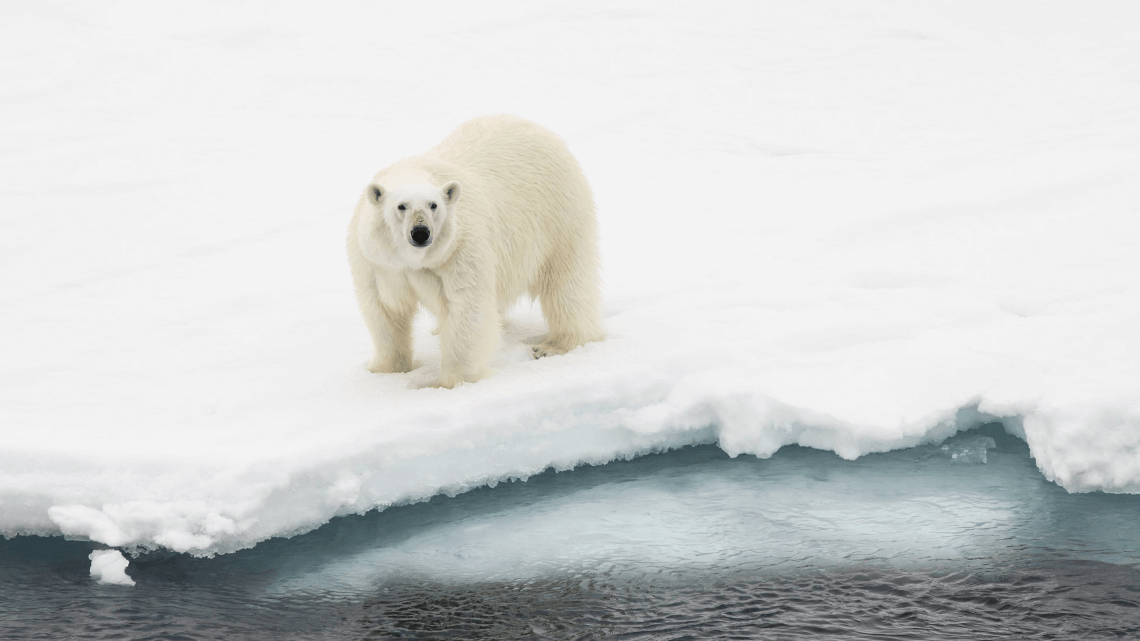 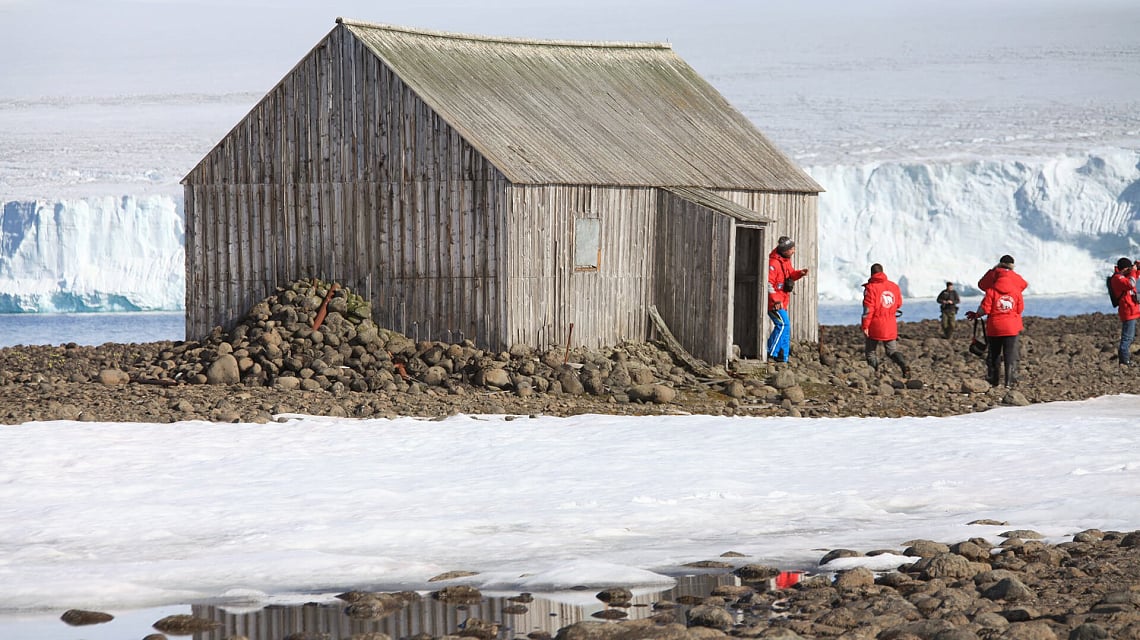 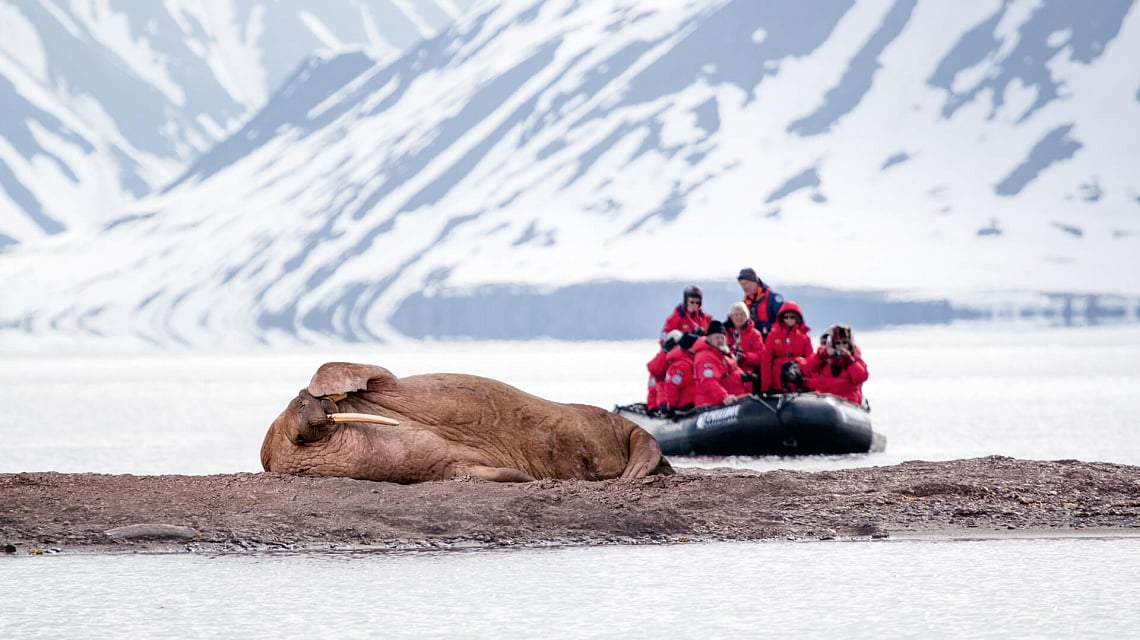 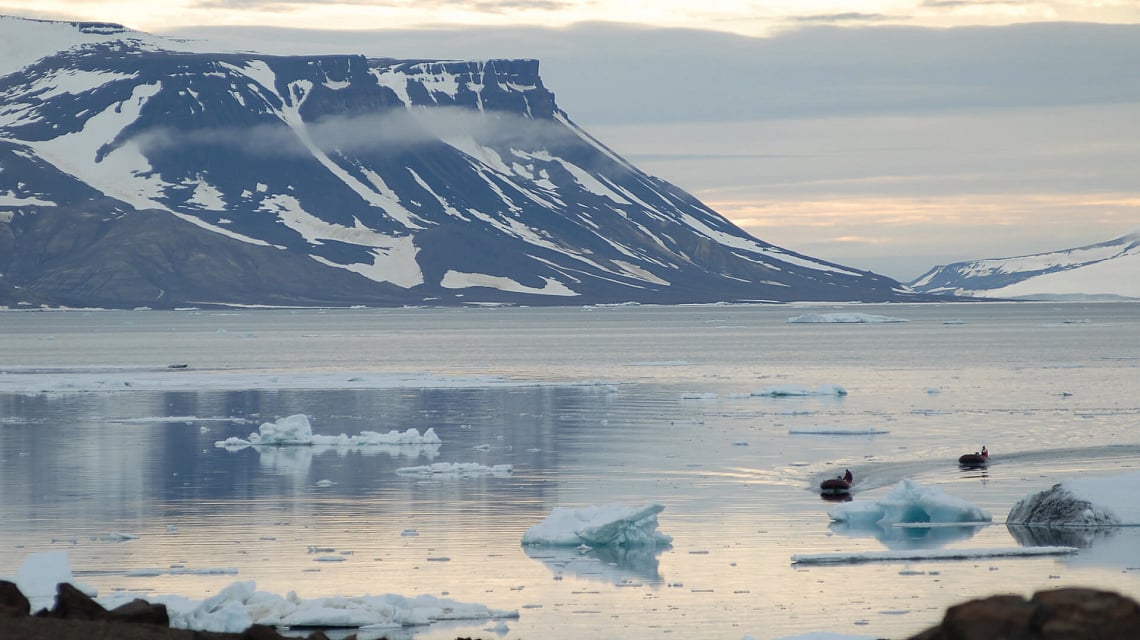 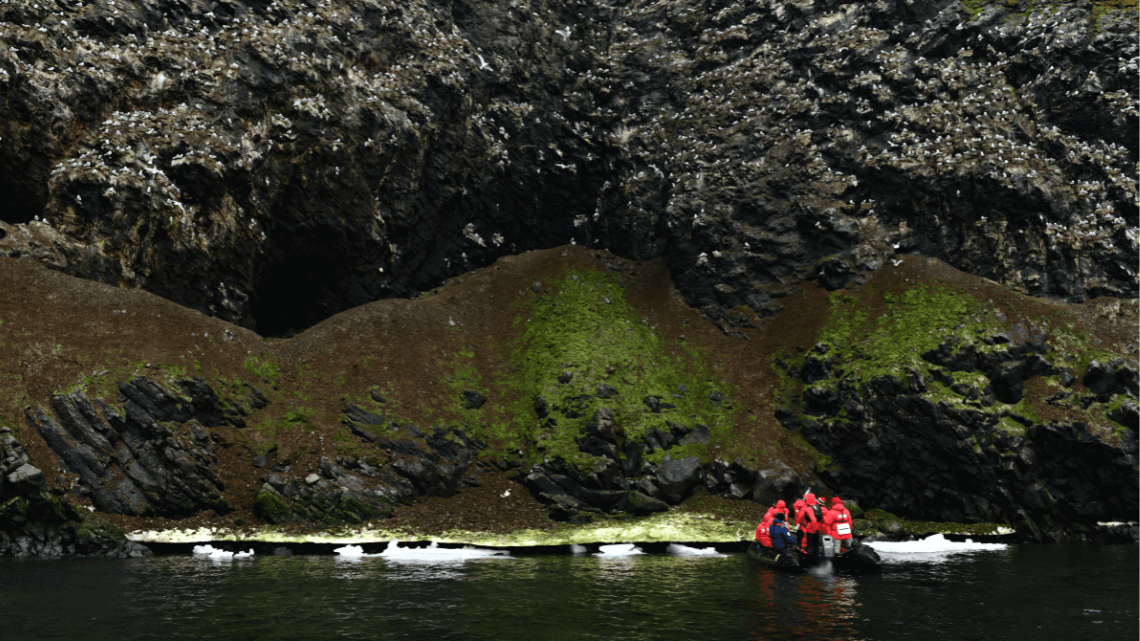 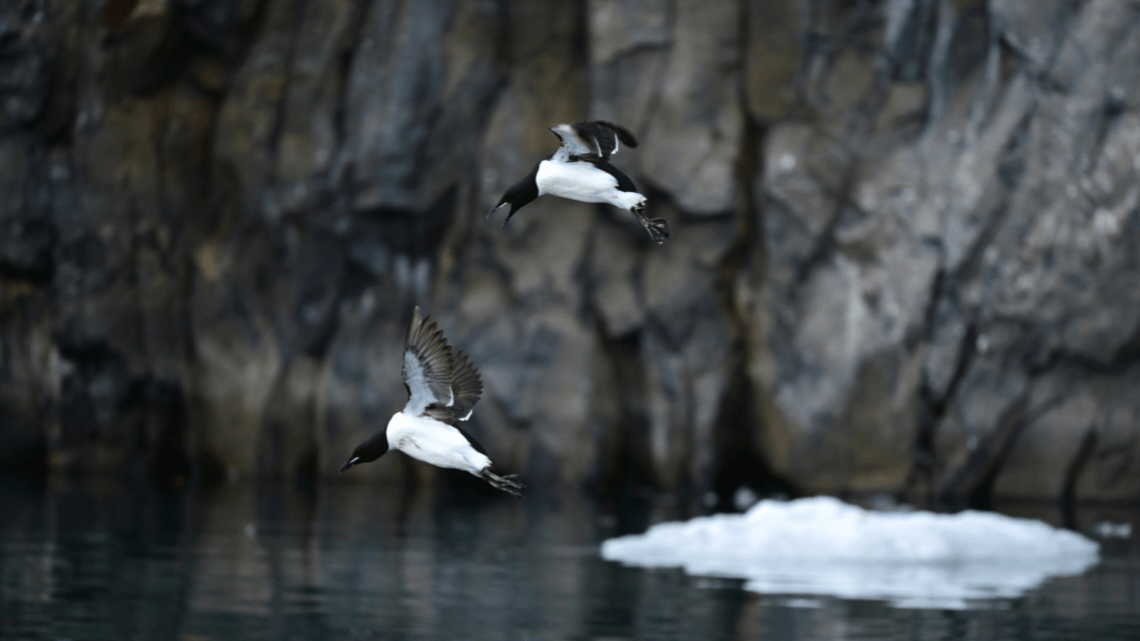 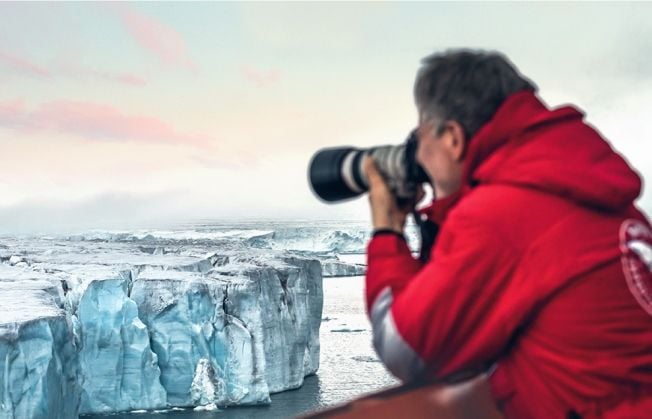 Franz Josef Land offers an abundance of unique photo opportunities. Our free photography program gives you the chance to learn and practice your photography skills alongside an expert photographer.

A dynamic land of contrasts, Franz Josef Land boasts lush tundra oases amidst vast polar deserts, bird cliffs in sight of glaciers, and sea ice any time of year. You can capture it all with the benefit of 24-hour daylight.

This enchanting landscape also has photo-worthy geological features such as the mysterious stone spheres of Champ Island. Our expert will be available to help you make the most of this bounty in your viewfinder.

If visitors to these islands are few, then kayakers who have taken advantage of these waters are far fewer still. This is a shame, as Franz Josef Land offers some amazing paddling opportunities.

A variety of ice features and the possibility of encountering seals and walrus make this an exciting place to be a kayaker. Paddling adventures here are real and unscripted as we explore rugged coastlines and uncharted waters in this remote Arctic wilderness.

Sea Kayak Club participants in Franz Josef Land have the opportunity to paddle where very few people have paddled before. If you enjoy sea kayaking, then do not miss your chance to participate in this fun and interesting optional activity. 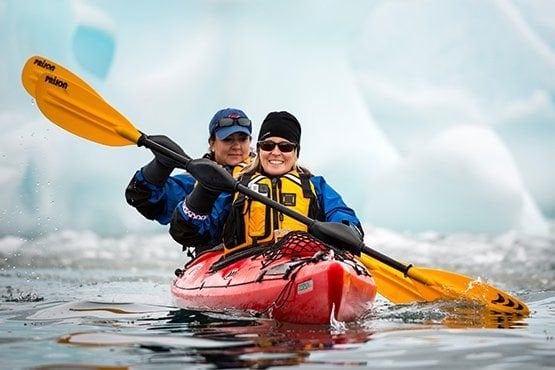 During our Franz Josef Land tours, we encounter a stark and enigmatic landscape steeped in the drama and heroism of early polar exploration. We have the opportunity to walk in the footsteps of Fridtjof Nansen, Frederick George Jackson, Julius von Payer and other polar explorers. At Tikhaya Bay, we explore the ruins of a Soviet-era research facility that was also a major base for polar expeditions.

More of the Arctic

If you choose a Franz Josef Land expedition, you will get to experience the stunning scenery and abundant wildlife in Spitsbergen, Svalbard’s largest island. This classic Arctic destination is home to a large population of polar bears. For North Pole expeditions, the main highlight of the voyage is reaching 90°N, where all meridians converge and every direction is south.

Franz Josef Land is a 192-island archipelago in the Russian High Arctic above the Arctic circle. With no permanent population, only scientists, military personnel, and rangers live on the archipelago. This pristine area is part of the Russian Arctic National Park, which you can only reach via cruise ship.

The remote High Arctic islands were likely first discovered in 1865 by a Norwegian sealing captain. Official records credit the Austro-Hungarian North Pole Expedition led by Julius von Payer and Karl Weyprecht. The initial goal of the expedition was to traverse the Northeast Passage and travel to the Pole. However, the vessel soon got locked in the ice, and by August 1873, it had drifted to unknown land. The explorers named it in honor of the Austro-Hungarian Emperor, Franz Josef I, and the cliffs that they spotted first were called Cape Tegetthoff, after their ship.

In the following decades, Franz Josef Land continued to attract adventurers to the edge of the world. Benjamin Leigh Smith explored the previously undiscovered southwestern islands, including Bell Island. In 1895-96, Norwegians Nansen and Johansen over-wintered in the north of the archipelago at a place they named Cape Norway. On a modern-day Franz Josef Land expedition cruise, you can visit historical sites that give silent testimony to the resilience of these early explorers.

Upon arrival at Franz Josef Land, travelers will have the opportunity to explore its islands, fjords and landing sites with daily shore excursions and Zodiac cruises. The exact route will be tailored to fit the weather and ice conditions. Our expert guides will brief you on the flora, fauna and geology of the area. Optional sea kayaking is offered for experienced passengers (not included in the cost). Be sure to join our daily educational presentations and programs aboard the Sea Spirit.

During North Pole expeditions, with more time at sea, you can learn how our icebreaker operates first-hand, attend lectures and events, and hit the onboard gym and sauna. Time, weather and ice conditions permitting, you will also experience breathtaking helicopter rides. Once we arrive at the Pole, we will celebrate on the ice with the northernmost barbeque on the planet.

Imagine the great photo ops on this trip! As a land of contrasts, Franz Josef Land boasts lush tundra oases amidst vast polar deserts, bird cliffs, glaciers and sea ice. You can capture it all with the benefit of 24-hour daylight. Our free photography workshops gives you the chance to learn and practice your photography skills – no matter your level of expertise – alongside a professional photographer.

How to get to Franz Josef Land

Franz Josef Land tours start and end in Longyearbyen, Svalbard’s main settlement on its biggest island, Spitsbergen. You can get there via regular commercial flight from Norway. North Pole expeditions start in Murmansk, Russia. Look for flights with stopovers in Moscow and St. Petersburg. Airfare is not included in the cruise package, but we can suggest the best routes and refer you to our airline booking partners. . Upon arrival, you will be greeted by our staff and transferred to a hotel (first night included in the cruise package).

To cruise to Franz Josef Land, you need a valid Russian visa. Refer to your local consulate or embassy to obtain it, or choose a commercial visa service to assist you. We provide a support letter and advise on the necessary documents. For cruises that start in Longyearbyen, Svalbard, citizens of some countries might need a Schengen visa as well to travel through mainland Norway on their way to the embarkation port.

Poseidon operates two cruise ships that voyage to Franz Josef Land. Amenities onboard the 114-passenger Sea Spirit include a restaurant, bar, spacious suites, lounges for lectures and entertainment and an outdoor bistro with a jacuzzi. The vessel has an ice-strengthened hull, a fleet of Zodiacs and a set of retractable fin stabilizers for smoother sailing.

North Pole cruises take place aboard a nuclear-powered icebreaker called 50 Years of Victory. Even though it was designed as a research ship, it offers comfortable accommodation and delicious cuisine. Meet like-minded travelers in the ship’s spacious lounges. The vessel also has a small salt-water pool on a lower deck and two adjacent saunas.

When to visit Franz Josef Land

During most of the year, the archipelago is only accessible via icebreaker due to the heavy ice sheet and harsh weather that make trips suitable only for research or containership assistance purposes. The Franz Josef Land travel season is set in July and August. During these months, the icebreaker is used by Poseidon and a regular ice-resistant ship like our Sea Spirit can also get closer to the islands and inlets where wildlife is plentiful. Ice is still plentiful here, and icebergs, glaciers and pack ice sparkle under the 24-hour sunlight.

You can expect temperatures of 3 - 7°C (37.4 - 44.6°F). Having the right clothing and gear is an essential part of a comfortable trip. Make sure to purchase Arctic-quality clothing that comes in layers you can easily put on and take off. We will provide a warm, windproof parka and rubber boots for shore excursions.

What’s included in the cruise package?

Important: A Russian visa is required for a Franz Josef Land cruise. Itinerary, landings and wildlife sightings during the cruise depend strongly on ice and weather conditions, and are subject to the decisions of the expedition leader and the captain of the vessel. But rest assured: they want a great trip – filled with wildlife and adventure – as much as you do!

Where is Franz Josef Land?

Franz Josef Land is located in the northeastern Barents Sea (in the high Arctic), only 900 kilometers from the North Pole. It is the northernmost territory of Russia.

Which expedition should I choose?

We have two types of cruises that go to Franz Josef Land. One focuses entirely on the exploration of the archipelago, with a few bonus days in Svalbard. The other is a trip to the North Pole, pausing in Franz Josef Land on the way back.

Will we see polar bears during the cruise?

Polar bears, as well as other Arctic wildlife, are frequently spotted around the archipelago. In July and August, they hunt in this area, following the pack ice and give birth to cubs. Sightings are likely, but not guaranteed.

What is sea kayaking like in Franz Josef Land?

Poseidon’s Sea Kayak Club participants have the opportunity to paddle where very few people have paddled before. The chance to see walruses and seals up close make this a wildlife lover’s dream.