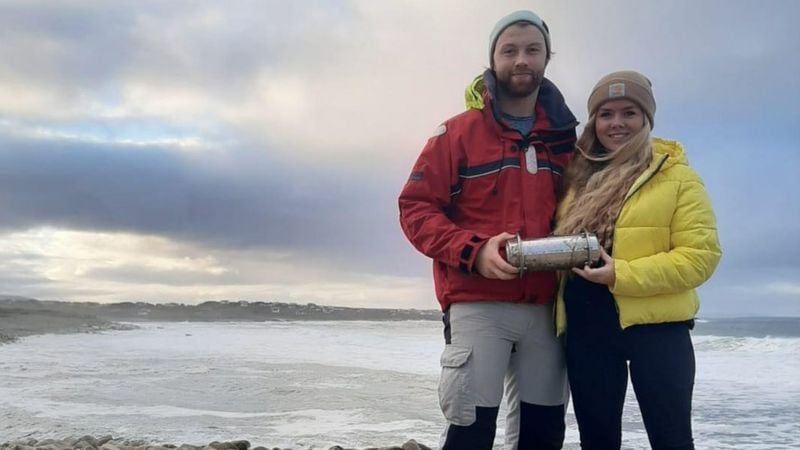 A mysterious metal tube. A Russian ice-breaker ship. An unlikely 4,000km journey out of the Arctic Circle.

Here we have all the ingredients for a Cold War thriller or perhaps a horror film - who knows what Thing the tube might be concealing after all.

Fortunately for Sophie Curran and Conor McClory, two Irish surfers, the washed-up cylinder turned out to be more fascinating than pure fear.

Inside they found a time capsule from a crew of Russian North Pole explorers.

It's believed the capsule travelled nearly 4,000km from the ice floes of the Arctic Circle to the slightly less icy, but still pretty cold, Atlantic waters off Bloody Foreland in Gweedore, County Donegal.

It included letters and photos of explorers onboard the 50 Years of Victory, the world's second biggest ice-breaking ship, from 2018.

Speaking to the Donegal Daily, Mr McClory said the two friends came across the strange-looking item when they were out checking on surf conditions.

He took the precaution of opening the capsule outside, not fully knowing its contents, the surfer told the Irish news website.


The 50 Years of Victory ship is an ice-breaker vessel, which takes passengers on commercial trips to the North Pole.

The ship, which can carry about 140 passengers and crew, is capable of breaking through ice as deep as 2.5 metres and can reach speeds of up to 18 knots (20mph) in open water.

Inside the capsule Mr McClory and Ms Curran found letters, food menus, badges, beer mats, wine corks and a collection of photographs from the 2018 expedition.

Breaking the ice (in person)

Speaking to BBC Radio Foyle's Mark Patterson Show, the friends said that two of the letters were written in English - but tracking down who put the capsule together would take some detective work.

They came across one of the authors of a letter, a Russian Instagram blogger from Saint Petersburg known as Sveta.

The blogger told them the contents of capsule were from the 2018 crew.


Speaking via Zoom, she told them the capsule was placed in the Arctic ice and that it must have melted and travelled the massive distance over the two years.

The friends said that Sveta was shocked when she heard the capsule had been found so recently.

"Most people thought it would have taken 30-50 years before people would find it," said Ms Curran.

"It just shows just how quickly the ice is melting," Mr McClory added.

Through the discovery, the Russian blogger and the Irish surfers have struck up an unlikely friendship and, when Covid-19 restrictions allow, are hoping to meet-up and go surfing together in County Donegal.

Mr McClory and Ms Curran said they have sent the other letters, which are written in Russian, to Professor Simon Donohue Nosek in Chicago.

"He speaks Irish, Russian and English and will hopefully translate the rest of the letters that were in the capsule," Mr McClory said.