Nowadays people travel to the Arctic aboard massive icebreakers with reinforced hulls. But it wasn’t always so. The history of Arctic exploration goes back to 12 century when Ruthenian settlers from the city of Velikiy Novgorod (Great New City in Russian) started to inhabit the shores of the White Sea. The climate there was harsh and conditions were unfavorable for crop farming, which was the main source of food for medieval Russians. Therefore these settlers had to adapt. They started hunting and fishing and by the 18th century they have organized trade routes which connected north of Russia with Norway. Their small but sturdy vessels were named Kotches and their design was somewhat relative with that of Nansen’s Fram and were capable of sailing even in the direst storms.

Pomors have also greatly contributed to the history of the Russian Navy. Their skills were invaluable for Peter the Great who started its creation. Pomors were also the ones who made it possible for Russia to achieve dominance on the Black, Baltic, and Azov seas in such short term.

Kotch (pl. kotchi), a special type of small wooden sailing ships designed and used in Russia for Polar voyages in the ice conditions of the Arctic seas. Because of its additional skinplanking (called kotsa) and Arctic design of the body and the rudder, it could sail without being damaged in the waters full of blocks of ice and ice floes. Kotch was the unique ship of this class and it remained as such for several centuries. This type of ship was in wide use during the heyday of Russian Polar navigation in 15th and 16th centuries. There is documentary proof that in those days the private Russian civil fleet in the Arctic seas numbered up to 7,400 small ships in a single year. 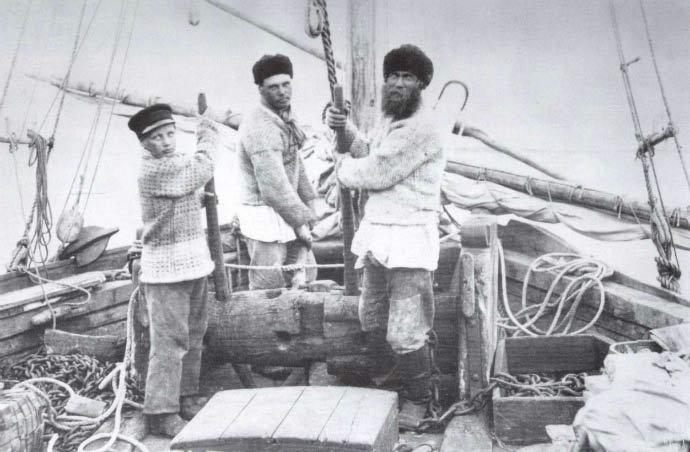 Pomors in the fishery. Photo from http://tainy.net/7687-delovyj-lyudi-rossijskoj-imperii.html

The keel length of kotch was about 21.6 meters (about 71 feet). Koch had 13 combination ribs, each consisting of several details. The keel was also a combination of several parts. Bulkheads divided the body into several cross-section compartments. Each compartment (cherdak) served for a specific purpose. There invariably was the for-part compartment used as the crew’s quarters, the stern cabin for the captain, and the cargo hold amidships. Koch had the flat deck. A typical kotch carried one square sail, and, usually, two triangular sails on the bowsprit. A distinctive peculiarity of kotch was the relatively big size of its square rudder fin which compensated for the special extra-slim design of the upper part of the rudder. This type of ship had two 70 pounds (32 kg) main anchors and, very often, light anchors. Naval historians think that the light anchors could have been used for mooring kotchis to the edge of the ice fields. Special Arctic design included the rounded lines of the ship’s body below the water-line, an additional belt of icefloe resistant flush skin-planking (made of oak or larch) along the variable water-line, a false keel for on-ice portage (and for damage prevention from running aground in shallow waters), and the shaft-like upper part and wide lower part (below water-line) of the rudder. Another Arctic feature was the invariable presence aboard any kotch of two or more iceboats and of a windlass with anchor rope. Each iceboat had a cargo capacity of 1.5 to 2.0 metric tons (3,300 to 4,400 lb) and was equipped with long runners (5 to 7 m/16 to 23 ft) for portage on ice. If a kotch became jammed amidst the ice, its rounded bodylines below the water-line would allow for the ship, squeezed by the ice-fields, to be pushed up out of the water and onto the ice with no damage to the body. Besides the antiicebound equipment, the captains of the kotchi had the traditional set of navigation instruments including, beside some other, a sundial, a magnetic compass with floating vetromet (wooden 32-point compass rose with 16 major winds). Other tools and means of navigation were the detailed charts and sailing directions, the stars, and the pilot’s marks on the familiar shores.

There are two main classifications of kotch subtypes. The first, a mixed classification, distinguishes between three subtypes of kotchis depending on both their place of origin (Siberian and Mangazeyan) and their seaworthiness (morskiye, that is “seafaring”). The second classification does not pay any attention to minor shipbuilding differences and divides all kotchis into two categories according to the main spheres of their maritime operations: river/sea, and morskiye (seafaring) for long-range sea voyages.