Polar bears are, at least in their image in the popular imagination, among the cutest, cuddliest animals on the planet. Like many wild animals that are actually quite ferocious but beloved as stuffed animals by children, polar bears have benefited greatly from good publicity. So it is difficult to reconcile that with the fact that for many years in Arctic regions, they have actually been hunted for meat, hides, body parts and even sport. Much of that practice has been curtailed or regulated by CITES (the Convention on International Trade in Endangered Species of Wild Fauna and Flora).

But even as steps have been taken to control direct man-made threats to polar bears, indirect actions now threaten them and their habitats, in the form of global warming and climate change. The approximately 20,000 to 25,000 polar bears worldwide face grave threats from the dwindling ice pack, which is a direct result of climate change. Whether climate change results from natural occurrences or human action such as carbon footprints and atmospheric pollution, most scientists are convinced that it is a fact and a major threat to the polar ice pack and the bears. 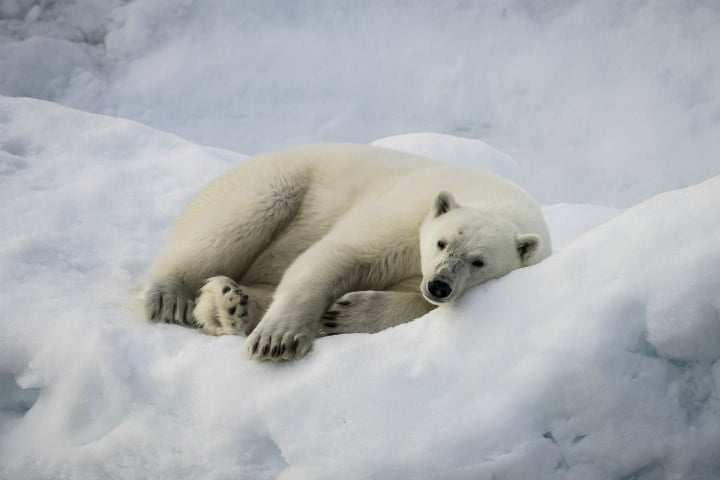 A U.S. government-appointed panel predicted in 2008 that two-thirds of the world’s polar bears could disappear by mid-century. Organizations such as Polar Bears International and the World Wildlife Fund have been in the forefront of the effort to save them.

Journals published by organizations such as the Society for Conservation Biology and Yale University have discussed the plight of 19 polar bear populations in Canada, Alaska, Greenland, Norway and Russia that face annihilation because of the melting of their icy habitats. The possibilities, which would once have sounded unthinkable or unfeasible, include feeding them by humans or relocating them to holding compounds until the ice refreezes.

One plan involves killing ringed seals, a primary source of food for the bears, which they cannot manage without the ice. Each bear may consume up to five seals a week. This could have other consequences for the delicate chain that makes up the world’s fragile ecosystems.

Russia, which has declared 2013 the “Year of the Environment,” and the United States recently cooperated on a treaty on endangered species, including greater protection for the bears.

It remains to be seen how successful the measures to save polar bears will be. Without a doubt, any action, no matter how small, will go a long way toward protecting them and their habitats.