About us / Expedition team / Saskia Travert 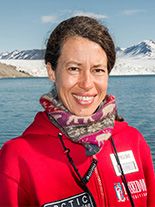 Saskia works now for Poseidon Expeditions as an Assistant Expedition Leader on board the nuclear powered Icebreaker 50 Let Pobedy going to the North Pole and the new ship of the fleet, Sea Spirit, sailing the Arctic.