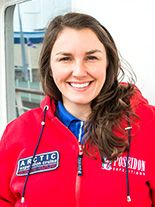 Born in New South Wales, Australia and raised in the American midwest, Lauren studied Advertising & Psychology at Pepperdine University in Los Angeles. Following 3 years of production in the film & TV industry, she moved to New York City where she has worked in marketing for TV networks.

Lauren spends half her year working in Antarctica and the Arctic and when she is home, she happily resides in Brooklyn as an editorial photographer, specializing in portraits and travel landscapes. She has been published by The New York Times, New York Magazine and Rolling Stone.

She is thrilled to be here with you now as your Expedition Photographer and looks forward to giving lectures, workshops and documenting your North Pole voyage. She is also a part of the Sea Ice Research Team and welcomes you to participate in this project.