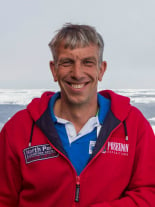 Born in the Netherlands and growing up in a small coastal town, Ab started birdwatching at a very young age. Observing and counting birds migrating along the Dutch coast is still one of his favorite activities. Later he started surveying breeding bird populations in the dunes around his hometown of Noordwijk. After graduating with a diploma in Nature and Landscaping, he worked for the Dutch Royal Family for over 15 years. He then got his International Tree Worker Certificate and started his own landscaping company. He also used his climbing skills to help with several research projects involving owls. At the age of 30, after traveling and birdwatching all over Europe, Ab started leading small private tours to good birding locations in Europe, USA, Africa, and Asia. In Noordwijk, Ab also served as a volunteer crewmember with the Royal Dutch Lifeboat Association for over 10 years. Since 2015, Ab has worked part-time as a birding guide on expedition ships and has made several trips to the Arctic and Antarctica.